Kids Encyclopedia Facts
Not to be confused with Burkeville, Virginia.

Burke is a census-designated place (CDP) in Fairfax County, Virginia, United States. As of the 2000 census, Burke had a total population of 57,737. Before 2010, the CDP was divided, with a portion of it becoming Burke Centre CDP; the population remaining in the Burke CDP was reported at 41,055 in the 2010 census.

The area of Fairfax County known as Burke is named for Silas Burke (1796–1854), a 19th-century farmer, merchant, and local politician who built a house on a hill overlooking the valley of Pohick Creek in approximately 1824. The house is still standing. When the Orange and Alexandria Railroad was constructed in the late 1840s, the railroad station at the base of that hill was named "Burke's Station" after Burke, who owned the land in the area and donated a right-of-way to the railroad company. The community that grew up around the railroad station acquired a post office branch in 1852. Currently, railroad tracks on the same historical line are owned by the Norfolk Southern Railway and form part of the Manassas line of the Virginia Railway Express commuter rail system, of which two stations lie in the Burke area. The original Burke Station building can still be seen in the community, turned 90 degrees from its historical footprint. 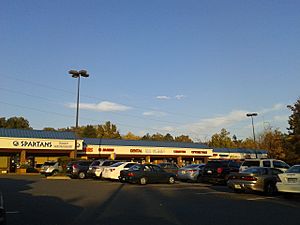 During the Civil War, the railway station was garrisoned by Union troops. The Bog Wallow Ambush occurred in the vicinity in 1861. On December 28, 1862, Confederate cavalry under General J.E.B. Stuart raided the station. Stuart seized supplies from the area, destroyed a nearby bridge, monitored Union messages passing over the telegraph lines, and then famously sent a telegram to Union Quartermaster General Montgomery C. Meigs complaining of the poor quality of the mules he had captured. Further action was seen in the neighborhood in 1863.

In 1903, the name of the post office was changed from Burke's Station to "Burke" by Henry C. Copperthite, who bought the Burke House and 241 acres (98 ha) to build a racetrack for trotting and pacing horses. Copperthite was the largest non-governmental employer in Washington, D.C., and he was the "King of Pie". In 1914 his factory in Georgetown was turning out 50,000 pies a day. He built four hotels, stables, and expanded the general store in Burke. Burke soon became a summer getaway from the city's heat for people from all walks of life who came to the Copperthite track and to Burke to attend fairs, see horse races, foot races, motorcycle races, exhibition boxing and baseball games. There were special trains that ran from Union Station in D.C., Alexandria, Prince William and Loudoun counties and as far away as Richmond. Copperthite installed the first phones in Burke, and his stables housed the horses of President McKinley and Vice President Theodore Roosevelt. The site of the racetrack was marked by a historic marker erected by Fairfax County in 2016.

The area remained predominantly rural well into the mid-20th century. After World War I, some employees of the federal government began moving into the area, and commuted to Washington by train.

In 1951, the U.S. Civil Aeronautics Administration announced plans to condemn 4,520 acres (1,830 ha) of land in Burke to construct a second airport to serve the Washington metropolitan area. After a lengthy lobbying campaign by area residents, the government in 1958 selected a site near Chantilly, Virginia, which is now Washington Dulles International Airport, instead of Burke. This parcel of land was later developed into what is now referred to as Burke Centre.

The first large subdivision in the vicinity, Kings Park, was constructed beginning in 1960, and was followed by many others over the next two decades, converting Burke into a densely populated suburban community.

A historic marker in Burke denotes the Huldah Coffer House, owned by a prominent resident of the county for many years. Another, privately erected, notes the site of the former Lee Chapel Methodist church, which was purposely burned in 1951 after having been abandoned for some years, but whose cemetery remains on the site.

Map of the Burke CDP

There were 19,215 households out of which 44.0% had children under the age of 18 living with them, 70.6% were married couples living together, 8.7% had a female householder with no husband present, and 18.0% were non-families. 13.4% of all households were made up of individuals and 2.9% had someone living alone who was 65 years of age or older. The average household size was 2.99 and the average family size was 3.30.

Burke is served by two Virginia Railway Express stations, Burke Centre (VRE station) and Rolling Road (VRE station), both on the Manassas line. It is also served by the Metrobus (Washington, D.C.) system, via the 17A, B, G, H, K, and L and the 18G, H, J, P, R, and S routes, with rush hour only service to the Pentagon and Springfield Metro stations.

Burke Centre is a 1,700-acre (690 ha) planned community that was formerly part of the Burke CDP but is now a separate census-designated area. It is located west of Burke and is divided into five subcommunities: The Commons, The Landings, The Oaks, The Ponds and The Woods. Other notable communities in the Burke area include Rolling Valley West, Burke Village I & II, Lakepointe, Longwood Knolls, Burke Lake Meadows, Edgewater, Lake Braddock, Signal Hill, Crownleigh, and Cherry Run along with Burke Station Square.

All distances are by road from Burke Station, the original settlement of Burke:

All content from Kiddle encyclopedia articles (including the article images and facts) can be freely used under Attribution-ShareAlike license, unless stated otherwise. Cite this article:
Burke, Virginia Facts for Kids. Kiddle Encyclopedia.