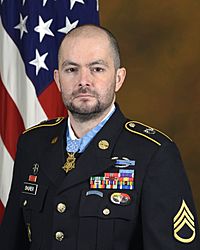 He was a senior medical sergeant during the Battle of Shok Valley in April 2008. He and his team were attacked by an enemy force of more than 200 fighters. Shurer fought for more than an hour to reach part of his unit.

He was initially awarded a Silver Star for this action, but in 2016 The Pentagon upgraded this recognition to a Medal of Honor. He received the medal in a White House ceremony on October 1, 2018.

Shurer died on May 14, 2020 of lung cancer-related problems at the Mayo Clinic in Rochester, Minnesota, aged 41.

All content from Kiddle encyclopedia articles (including the article images and facts) can be freely used under Attribution-ShareAlike license, unless stated otherwise. Cite this article:
Ronald J. Shurer Facts for Kids. Kiddle Encyclopedia.