Springfield is a census-designated place (CDP) in Fairfax County, Virginia, United States. The Springfield CDP is recognized by the U.S. Census Bureau with a population of 30,484 as of the 2010 census. Homes and businesses in bordering CDPs including North Springfield, West Springfield, and Newington are usually given a Springfield mailing address. The population of the collective areas with Springfield addresses is estimated to exceed 100,000. The CDP is a part of Northern Virginia, the most populous region of the Washington Metropolitan Area.

The area is dominated by the interchange of I-95, I-395, and the Capital Beltway (I-495), known as the Springfield Interchange. The center of the town is at the intersection of Route 644 (Old Keene Mill Road / Franconia Road) and Route 617 (Backlick Road) adjacent to the interchange. A significant commercial district exists around the interchange area, but the rest of the community is primarily residential in character.

According to the U.S. Postal Service, Springfield collectively has four ZIP codes:

The following are total area, water area, and land area statistics (in square miles) for the four Springfield zip codes:

A saw and grist mill was constructed in the vicinity of what is today Springfield between 1796 and 1800. Owned by James Keene, it gave its name to today's Old Keene Mill Road. The mill served farms in the area for around sixty years before its discontinuation. Nothing remains of it today save for two mill races. 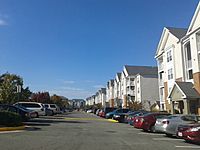 Springfield was founded in 1847 around the Orange and Alexandria Railroad's Daingerfield Station; this is today the Backlick Road Virginia Railway Express station, located off Backlick Road. The station was named for "Springfield Farm", owned by Henry Daingerfield, an Alexandria businessman who sat on the railroad's board of directors. The post office was completed sometime after 1851. It was in existence at the time of the American Civil War, being the site of a skirmish on October 3, 1861 and a Confederate raid on August 3, 1863. The station served as the first Springfield Post Office from 1866 to 1868.

In 1877, Richard Moore petitioned for a post office, which he named Moor; it was located about a little over a mile south of the station, near the intersection of Fairfax (now Old Keene Mill) and Backlick roads. The post office name was changed in 1881 to Garfield to honor the late President James A. Garfield, who had been assassinated that year. In 1907, the Garfield post office closed and a new postal station named Corbett (after the then-landowner) opened back at the railroad station. The name "Springfield" was reinstated for good on June 27, 1910, although the name Garfield continued to appear on maps at least through the 1930s. The post office was moved to a new site in 1933.

Springfield remained a rural crossroads until 1946, when realtor Edward Carr decided to subdivide the area for suburban development along the recently opened Henry Shirley Highway (now I-95/I-395). Carr believed this to be the last easily accessible tract within 12 miles (19 km) of Washington, D.C., and indeed, the newly developed area grew quickly. In 1950, the area had an estimated population of 1,000; Robert E. Lee High School was built in 1957. By 1960, the population was reported as over 10,000; it grew past 25,000 by 1970 with the North and West Springfield neighborhoods.

Springfield became a major retail destination with the opening of the Springfield Mall (now Springfield Town Center) in 1973–75 (the second regional shopping center in Northern Virginia after Tysons Corner), as well as the Springfield and Brookfield shopping centers. The 1980s and 1990s saw the expansion of retail and high-density housing in the area, at least until the opening of the Franconia-Springfield Parkway in 1996, and the Franconia-Springfield Metro and Virginia Rail Express Station in 1997. The mall was renovated from an indoor facility into a town center with a mixture of shopping, office, and residential development; its first phase opened in 2014. 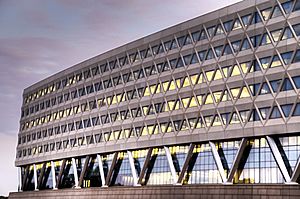 The center of Springfield is at Route 644 (Old Keene Mill Road / Franconia Road) and Route 617. The old "Garfield" name still survives in the nearby Garfield Elementary School.

The Sydenstricker School, completed in 1928, was listed on the National Register of Historic Places in 2012.

The zip code population totals for the entire Springfield community (as defined by USPS) are as follows:

The West Springfield District Police Station of the Fairfax County Police Department is at 6140 Rolling Road. 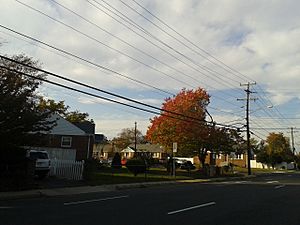 Residential area in northern Springfield, along Backlick Road near the border of Springfield and North Springfield

Springfield Mall was a large indoor shopping mall near the Springfield Interchange, the intersection of Interstate highways I-95 and I-495. It contained several anchor stores and a food court. In 2001, two of the hijackers in the September 11 attacks, Hani Hanjour and Khalid al-Mihdhar, illegally obtained state identification at the mall's DMV office.

In 2005, the mall was purchased by Vornado Realty Trust, which closed the structure, renovated it to add housing and office space, and reopened it in 2014 as "Springfield Town Center".

Central Springfield is dominated by the Springfield Interchange, popularly known as the "Mixing Bowl" or the "Melting Pot", a name taken from an earlier interchange near the Pentagon. The interchange includes three Interstates (I-95, I-395, and I-495), with two exits less than a half mile apart, with two roads (Commerce Street and Route 644 (Old Keene Mill Road / Franconia Road)) going over or under I-95 within less than a half mile, and is further complicated by the presence of a separate, reversible high-occupancy vehicle lane passing through the center of two of the interstates.

Built between 1999 and 2007 at a cost of $676 million, the Springfield Interchange Improvement Project was finished on time and on budget, according to the Virginia Department of Transportation, and dedicated on July 18, 2007, by Virginia Governor Timothy M. Kaine. 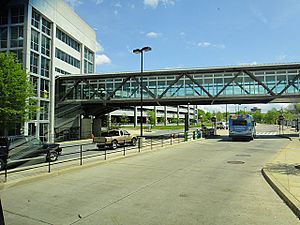 The corporate headquarters of Ensco are physically located in the Ravensworth census-designated place, with a Springfield postal address.

Private schools in the vicinity of Springfield include St. Bernadette School (of the Roman Catholic Diocese of Arlington) in West Springfield CDP, Springfield Academy, the Word of Life Christian Academy, Iqra Elementary, and Al-Qalam Academy.

The medical campus of Northern Virginia Community College is located in Springfield. It offers a variety of associates degrees and certificates.

All content from Kiddle encyclopedia articles (including the article images and facts) can be freely used under Attribution-ShareAlike license, unless stated otherwise. Cite this article:
Springfield, Virginia Facts for Kids. Kiddle Encyclopedia.