Kids Encyclopedia Facts
Not to be confused with Chantilly, Oise.

Chantilly is a census-designated place (CDP) in western Fairfax County, Virginia, United States. The population was 23,039 at the 2010 census. Chantilly is named after an early-19th-century mansion and farm, which in turn took the name of an 18th-century plantation that was located in Westmoreland County, Virginia. The name "Chantilly" originated in France with the Château de Chantilly, about 28 miles north of Paris.

Located in the Northern Virginia portion of the Washington metropolitan area, Chantilly sits approximately 25 miles (40 km) west of Washington, D.C., via Interstate 66 and U.S. Route 50. It is located between Centreville to the south, Herndon and Reston to the north and northeast, respectively, and Fairfax 7 miles (11 km) to the southeast. U.S. Route 50 and Virginia State Route 28 intersect in Chantilly, and these highways provide access to the Dulles/Reston/Tysons Corner technology corridor and other major employment centers in Northern Virginia and Washington, D.C. 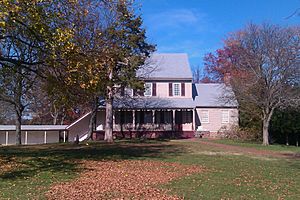 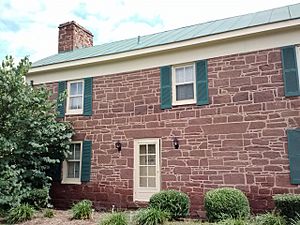 The Stone House. The only building of the former Chantilly Plantation (not to be confused with the Sully Plantation) that still exists today. It is located on the north side of Route 50, across from the Greenbriar Shopping Center. Historical evidence strongly suggests the Stone House was an overseer's quarters before the Civil War, and became a tavern later.

Chantilly was home to a number of colonial plantations in the 1700s, including the Sully Plantation (now the Sully Historic Site) built by Richard Bland Lee I. Other plantations included George Richard Lee Turberville's "Leeton Grove" (originally a 5,000+ acre plantation, the main house of which still stands at 4619 Walney Rd.), the John Hutchison Farm, and the Chantilly Plantation, after which Chantilly is named. Cornelia Lee Turberville Stuart, who was born at Leeton and was the daughter of George Richard Lee Turberville and Henrietta Lee, inherited a portion of Leeton in 1817 from her father. Stuart and her husband Charles Calvert Stuart, whom she had married in 1816, constructed the Chantilly Plantation and named it after the Westmoreland County plantation owned by her grandfather, Richard Henry Lee, a signer of the Declaration of Independence. During the Civil War, federal troops destroyed by fire the Chantilly Plantation manor house. One building remains, a stone house across Route 50 from the Greenbriar Shopping Center. While it is not clear what this stone house was used for, most historical evidence suggests it was probably a plantation overseer's quarters during the antebellum period, and a tavern or boarding house following the war. After the war, Cornelia Stuart, who had become deeply in debt, sold her 1,064-acre (431 ha) Chantilly estate. The advertisement for the sale referenced several "tenements", one of which was the Stone House.

The village grew during the 19th century, particularly following the construction of the Little River Turnpike to Winchester.

The evolution of the Chantilly area into an outer suburb of Washington, D.C., gained momentum after 1980, as developers built residential subdivisions and commercial areas, filling in the farmland south of Dulles Airport.

During the American Civil War on September 1, 1862, the Battle of Chantilly (or Ox Hill) was fought nearby. Following his victory at the Second Battle of Bull Run (or Second Manassas), Confederate General Robert E. Lee directed Major General Thomas J. "Stonewall" Jackson to cross Bull Run on August 31 and sweep around the position of Major General John Pope's Union Army of Virginia at Centreville. Reaching the Little River Turnpike (now U.S. Route 50) northwest of Centreville, Jackson turned southeastward toward Fairfax Court House (now the city of Fairfax) to strike in rear of Pope's army.

During September 1, Pope, apprised of Jackson's movement, began to withdraw toward Fairfax Court House. Late in the day, Jackson clashed with Union forces under Brigadier General Isaac Stevens and Major General Philip Kearny near Ox Hill, west of Fairfax. During the ensuing battle, which was fought amid a raging storm, both Union generals Stevens and Kearny were killed. The fighting ended at dusk, and Pope's army continued its withdrawal to Fairfax and subsequently to the Washington defenses.

Although commercial and residential development now covers most of the Chantilly (Ox Hill) battlefield, a small county park preserves a 5-acre (20,000 m2) portion of the battle site. 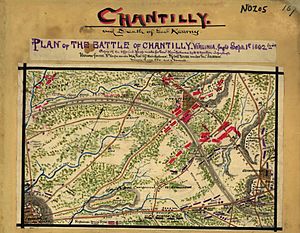 During the Civil War, Chantilly stretched to the intersection of West Ox Road and Monument Drive, shown in this original map of the Battle of Chantilly at the "GAP" between the two railroad grades to the immediate southeast of "A.P. Hill"

The present center of Chantilly is located around the intersection of U.S. Route 50 (Lee Jackson Memorial Highway) and Virginia Route 28 (Sully Road).

There were 7,218 households, out of which 47.8% had children under the age of 18 living with them, 67.0% were headed by married couples living together, 10.6% had a female householder with no husband present, and 17.7% were non-families. Of all households 13.0% were made up of individuals, and 2.4% were someone living alone who was 65 years of age or older. The average household size was 3.19, and the average family size was 3.46. 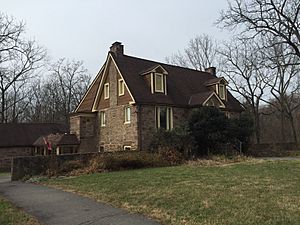 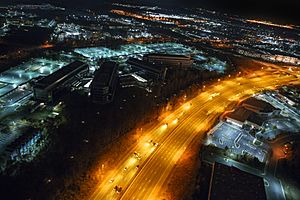 The American Registry for Internet Numbers is headquartered adjacent to Washington Dulles International Airport, near Chantilly.

At one time, Compass Airlines was headquartered near Chantilly. The headquarters was relocated to Minnesota in late 2009.

Residents of the CDP go to Fairfax County Public Schools.

All content from Kiddle encyclopedia articles (including the article images and facts) can be freely used under Attribution-ShareAlike license, unless stated otherwise. Cite this article:
Chantilly, Virginia Facts for Kids. Kiddle Encyclopedia.