Kids Encyclopedia Facts
Not to be confused with Clifton Forge, Virginia.

Clifton is an incorporated town located in southwestern Fairfax County, Virginia, United States, with a population of 282 at the time of the 2010 census, up from 185 at the 2000 census.

Incorporated by the General Assembly on March 9, 1902, Clifton is currently one of only three towns in the county, the other two being Vienna and Herndon. Clifton's history begins pre-colonially, when the area was used as hunting grounds by the local Dogue Native American tribe. A railroad siding was constructed here during the Civil War, and the area became titled as Devereux Station. A nearby neighborhood on the outskirts of the Clifton ZIP code has this name. Development of a village at the siding began in 1868 when a railroad depot, named "Clifton Station", was constructed.

Unlike most areas in Northern Virginia, the land around Clifton is far less built up than nearby areas, especially to its east and southwest. This was out of the worry that overdevelopment near Bull Run and the Occoquan River would be environmentally damaging to the Occoquan Reservoir. Consequently, as development edged near the area in the late 1970s and early 1980s, an ordinance was enacted stating that only one building could be placed on 5-acre (20,000 m2) parcels that have not already been divided. Today, the southern and eastern portions of the area are heavily forested, with single-family homes, while the northern area has become equestrian areas.

Before the arrival of European settlers, the present-day Clifton area was part of the hunting grounds used by Algonquin-speaking members of the Dogue tribe. The Dogue lived in villages and towns along the Potomac River and nearby Occoquan River. They carved bowls out of soapstone found in the area.

European settlers composed of Scots merchants created the first nearby port settlement in the mid-1710s near the present-day Dumfries-Triangle area. Land in the Clifton area began to be settled in the early 18th century.

During the Civil War, the United States Military Railroad Construction Corps built a railroad siding here on the Orange and Alexandria Railroad in order to supply the Union Army with timber for railroad ties, bridge trusses, and firewood. The siding was named after John Henry Devereux, superintendent of military railroads that terminated in Alexandria. Wood from hundreds of acres was cut and hauled by wood choppers and teamsters, most of whom were escaped slaves, and transported by train to Alexandria. The laborers risked capture by working outside protected Union lines.

In spring 1863, a wye was constructed at Devereux Siding to enable trains to turn around after the Union Army abandoned the Orange and Alexandria Railroad south of Bull Run. By June 1863 the entire railroad outside of the defenses of Washington was abandoned until the return of Major General George Meade's Army of the Potomac following their successful Gettysburg Campaign. New York infantry regiments were stationed at the siding in order to protect wood station operations and the railroad from Confederate attack.

Devereux Siding was located between the station at Union Mills and Sangster's Station. Today, there are two neighborhoods outside of the town named after the Devereux and Sangster's stations. The Orange & Alexandria Railroad extended from Alexandria to Orange, Virginia. For a brief period near the close of the war, the siding became the sixth scheduled stop for passengers and freight and became known as "Devereux Station".

The O & A was the only railroad link between Alexandria and Richmond, Virginia.

William E. Beckwith bequeathed his land south of the railroad to his former slaves, some of whom were his children. Harriet Harris and the five children she had with William Harris were devised the land where the village of Clifton was initially developed. Harrison G. Otis, a New York realtor, purchased a large tract of land north of the railroad from the Beckwith estate and a small lot of land south of the railroad from William Harris, where he constructed a saw mill and train depot. The depot opened in November 1868 and was named "Clifton Station". The next year, an official U.S. post office opened at the depot, and Otis built the historic Clifton Hotel. Harrison Otis and his brother J. Sanford Otis founded the Clifton Presbyterian Church, still in existence. The station no longer exists, but the town of Clifton is still standing along what used to be the O & A Railroad, now a part of the Norfolk Southern Railway.

William Harris divided a portion of his family's land adjacent to the railroad into ten lots that were offered for sale in 1869. Homes and businesses were constructed on the lots, including a general merchandise store located on the western side of Main Street adjacent to the railroad. Harris expanded the village by selling additional lots along Main Street in the mid-1870s. Harrison Otis and his business partner Margaret Hetzel subdivided land on the eastern side of Main Street for development and several lots were sold in the 1870s; however, this development was not as successful as planned due to Harrison Otis's reduced mental health and Margaret Hetzel's financial difficulties.

The village grew in the late 1800s when a number of homes and businesses were constructed, including additional merchandise stores and lumber yards.

The town was incorporated by the General Assembly on March 9, 1902. It is currently one of only three towns in the Fairfax County, the other two being Vienna and Herndon.

During the 1900s, the town was nearly the same size as it is now. The first schoolhouse in Clifton was in Susan Reviere Hetzel's home on Pendleton Avenue. She was also one of the founders of the Daughters of the American Revolution. The school was later moved to the side-yard area of what would later become the home of Mayors Swem Elgin and Jim Chesley. In 1912 a new schoolhouse (built for K-12) was built overlooking the town; it stood until 1952. A new elementary school, Clifton Elementary, was built on the same site in 1953 and served the community until 2003. On March 9, 1930, the Clifton General Store caught fire, and a few months later a new general store was built in its place.

By the late 1960s, the town was decaying. Many houses in the town were boarded up and abandoned. A number of new families and residents began much-needed gentrification of the town. Wayne Nickum, a former mayor, worked to ensure the entire town was named to the National Register of Historic Places in 1985. Some 63 Clifton buildings were added to the register at that time. Another resident, Jim Chesley, who would also serve as mayor of Clifton, worked tirelessly with national and state politicians and administrators to ensure the town maintained its historic integrity. In 1967, the town sponsored the first Clifton Day Festival as a way to attract the public to this historic town. This celebration continues each year as a town fair and music festival on the Sunday before Columbus Day in October.

Towards the late 1970s and early 1980s suburban development was starting to edge near Clifton. Communities such as Burkde Center and Little Rocky Run were constructed, raising concerns that the new construction might ruin the beauty of the Clifton area. In the 1980s, an ordinance was enacted stating that only one building could be placed on 5-acre (20,000 m2) parcels that have not already been divided. Single-family homes were constructed in the southern and eastern parts of Clifton, while land to the north became equestrian areas.

The town was declared a National Historic District by the US Department of the Interior in 1984.

Proposals for the Monticello Freeway and the Northern Virginia Expressway, which were never constructed, were proposed to make a large-scale interchange near Clifton.

There are still many families moving into the area despite disputes with contractors and developers. Formation of the Occoquan Watershed in the 1970s limited development due to ecological concerns and required all houses in the area to have at least 5 acres (20,000 m2) of land. This prevents nearly all development other than luxury single-family homes. In 2002, a new community was built on the edge of town called Frog Hill. Controversy arose about demolishing the abandoned Hetzel home on the corner of Chapel Road and Pendleton Avenue in 2006. The building and a replica home were finished in the winter of 2007.

In 2000, then-mayor Jim Chesley started a Labor Day antique car show in Clifton sponsored by the Northern Virginia Custom Cruisers and Clifton Lions clubs to raise money for local charities. The ninth annual Labor Day Car Show in 2008 attracted more than 400 antique cars, an estimated two thousand visitors, and raised over $30,000. That year's featured charity was Life With Cancer, a Fairfax hospital-based program that provides family support and education. In the past five years alone, the event has raised nearly $120,000 for various local charities.

Lynne Garvey Hodge and Jennifer Chesley co-chaired the annual Clifton Candlelight Homes Tour from 2002 to 2009. It has been held each year on the first Saturday in December. Chesley served solo in this capacity in 2010 and 2011. Included on the tour are five homes decorated for the holidays, the Caboose and live music in the churches.

The Clifton Spring Homes Tour is run by the Clifton Community Woman's Club and is held on the third Thursday in May. The 100-member General Federation of Women's Club group raises money for local charities via home tours, silent auction, boutique, and local women's art show and sale.

The opening scenes of Broadcast News were filmed in Clifton in 1986.

There were 67 households out of which 40.3% had children under the age of 18 living with them, 68.7% were married couples living together, 6.0% had a female householder with no husband present, and 20.9% were non-families. 13.4% of all households were made up of individuals and 3.0% had someone living alone who was 65 years of age or older. The average household size was 2.76 and the average family size was 3.06. 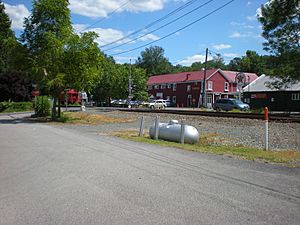 The Heart in Hand restaurant in Clifton, VA

All of the listed points of interest are outside of the Clifton town limits, except for a small part of Clifton Park. This park is fully owned and run by the Town of Clifton.

All content from Kiddle encyclopedia articles (including the article images and facts) can be freely used under Attribution-ShareAlike license, unless stated otherwise. Cite this article:
Clifton, Virginia Facts for Kids. Kiddle Encyclopedia.