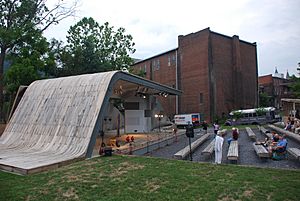 Clifton Forge is a town in Alleghany County, Virginia, United States which is part of the Roanoke Region. The population was 3,884 at the 2010 census. The Jackson River flows through the town, which as a result was once known as Jackson's River Station.

Clifton Forge was an independent city during the 2000 census. However, in 2001, Clifton Forge gave up its city status and reverted to a town. In previous decades, the railroad was a major employer. Clifton Forge is known for its mountain views and clear streams.

Clifton Forge is serviced by three major highways, Interstate 64, US 60, and US 220.

According to the United States Census Bureau, the town had a total area of 3.1 square miles (8.0 km2), all land.

Portions of the town were built upon a bridge, elevating the town above a stream.

There were 1,701 households out of which 23.9% had children under the age of 18 living with them, 37.8% were married couples living together, 13.8% had a female householder with no husband present, and 42.3% were non-families. 37.4% of all households were made up of individuals and 19.1% had someone living alone who was 65 years of age or older. The average household size was 2.18 and the average family size was 2.85.

The climate in this area is characterized by hot, humid summers and generally mild to cool winters. According to the Köppen Climate Classification system, Clifton Forge has a humid subtropical climate, abbreviated "Cfa" on climate maps.

All content from Kiddle encyclopedia articles (including the article images and facts) can be freely used under Attribution-ShareAlike license, unless stated otherwise. Cite this article:
Clifton Forge, Virginia Facts for Kids. Kiddle Encyclopedia.