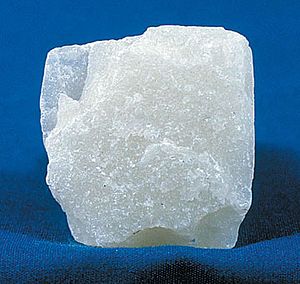 A block of talc 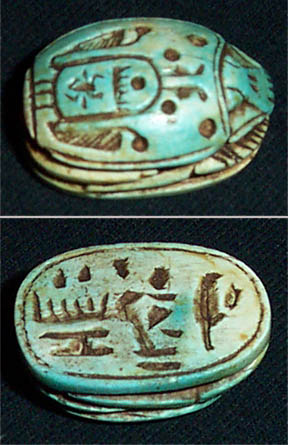 An Egyptian ornament made out of steatite.

Soapstone or steatite is a metamorphic rock. It has a large amount of the mineral talc.

Steatite is softer than most stones. Because steatite feels like soap, people call it "soapstone". People have been making things out of soapstone for thousands of years.

Soapstone has been a major component of ceramics used as electrical component insulators for many years. It is easily formed or carved into shapes.

During the Harappan/Indus civilization (2500 BC–1750 BC) soapstone was used in the manufacture of seals. These people used to import steatite from Shaher-i-sokhta and the Kirthar hills. 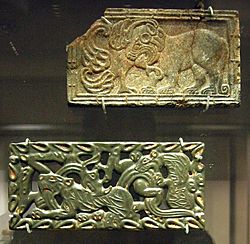 Chinese jade and soapstone plaques, in the Scythian-style animal art of the steppes. 4th–3rd century BC. British Museum

All content from Kiddle encyclopedia articles (including the article images and facts) can be freely used under Attribution-ShareAlike license, unless stated otherwise. Cite this article:
Soapstone Facts for Kids. Kiddle Encyclopedia.