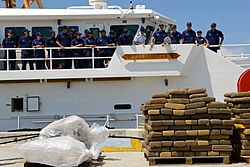 The word contraband (Old French contrebande "a smuggling") means any item which is illegal to be possessed or sold. The term is used for goods such as: 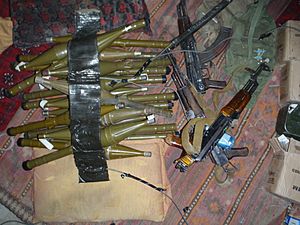 In international law, contraband means goods sent to territories under the control of the enemy that can be used in armed conflict. Traditionally, contraband is classified into two categories, absolute contraband and conditional contraband. Absolute contraband includes arms, munitions, and various materials. These can include chemicals and certain types of machinery that may be used to wage war.

Conditional contraband includes food and livestock feed. Cargo of this kind, while presumably innocent in character, can be seized if the supplies are destined for the armed forces of the enemy. Under conditions of modern warfare almost everything can be called absolute contraband.

During the American Civil War, slaves who sought refuge in Union army military camps or who lived in territories that fell under Union control were declared contraband. This policy was first used by General Benjamin F. Butler in 1861, in what came to be known as the "Fort Monroe Doctrine," established in Hampton, Virginia. By war's end, the Union had set up 100 contraband camps in the Southern United States. The Roanoke Island Freedmen's Colony (1863–1867) was developed to be a colony. Many adult former slaves worked for wages for the Army at such camps.

All content from Kiddle encyclopedia articles (including the article images and facts) can be freely used under Attribution-ShareAlike license, unless stated otherwise. Cite this article:
Contraband Facts for Kids. Kiddle Encyclopedia.