Kids Encyclopedia Facts
This page is about the town in the United States. For the town in Scotland, see Dumfries.

Dumfries, officially the Town of Dumfries, is a town in Prince William County, Virginia. The population was 4,961 at the 2010 United States Census.

According to the United States Census Bureau, the town has a total area of 1.6 square miles (4.1 km²), all of it land. The town is situated 78 miles north of the state capital, Richmond. It is 25 miles/40 km south of central Washington, D.C. 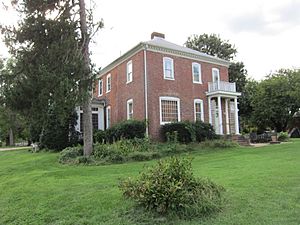 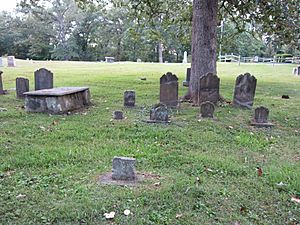 Dumfries history began as early as 1690 when Richard Gibson erected a gristmill on Quantico Creek. A customhouse and warehouse followed in 1731, and many others cropped up along the estuary by 1732. The Town of Dumfries was formally established on 60 acres (240,000 m2) of land at the head of the harbor of Quantico Creek, provided by John Graham. He named the town after his birthplace, Dumfries, Scotland.

After much political maneuvering, the General Assembly established Dumfries as the first of seven townships in the county. Dumfries received its charter on May 11, 1749, making it the oldest continuously chartered town in Virginia.

The Ceremonial Seal of the Town of Dumfries embodies elements of its heritage, from the period of 1651, when the first patents were issued to colonists, who following the Potomac recognized the value of a snug harbor in Quantico Creek. Thus the foundations for the establishment of a town, which in 1749 received its charter from the Colonial government in Williamsburg, Virginia.

The elements of the seal are contained within the pattern formed by the outer frame of a hawser rope or cable, and the inner frame of an anchor chain, of a type employed in ships of the Colonial era.

Within these frames are found items which are consistent with a town of maritime background. They are overlaid on a chart of the Chesapeake Bay and the Potomac River, with Dumfries indicated at the head of Quantico Creek. The navigational aids of the sextant and compass rose complete the maritime motif.

The two water fowl relate to the wetlands of Quantico Creek. The dock with fishnet, pilings, ships block and line further the theme of a mercantile port of call. The thistle indicates the Scottish founders of the town, with the name of Dumfries, taken by John Graham, the founder, in honor of his home in Scotland. The supporters of the shield are, on the left, a Piscataway brave, of the Powhatan Confederacy, the predominant tribe along the Potomac, in this area. On the right, a Colonial militiaman of 1775, when Colonel Henry Lee was company Commander. The shield in its upper quadrant, displays a sailing vessel of the period, and below the tobacco leaf, the first commodity, overlaid with shafts of wheat, the later commodity that supported the town.

When Dumfries became the second leading port in Colonial America receiving tobacco from the upland, it rivaled New York, Philadelphia and Boston. Dumfries peaked in size and importance in 1763. For about 15 years Dumfries was a thriving port when several factors brought about its demise: the Revolutionary War, erosion and siltation, and the shift in the main shipping commodity (from tobacco to wheat and sugar).

The Dumfries Cemetery contains burials of some of the Dumfries pioneers.

Alexander Henderson built a house known as the Henderson House which still stands on a hill in Dumfries, as well as owning various land in Prince William Forest Park. Alexander was a merchant when the ports were booming in Dumfries. Alexander is famous for his son, United States Marine Corps commandant Archibald Henderson.

The Leesylvania Archeological Site (44PW7), Old Hotel, and Weems-Botts Museum are listed on the National Register of Historic Places.

Dumfries was combined with the community of Triangle, Virginia to form Dumfries-Triangle in the 1950 United States Census. However, the two communities were separated again by the time of the 1960 census.

There were 1,573 households out of which 46.5% had children under the age of 18 living with them, 48.8% were married couples living together, 19.7% had a female householder with no husband present, and 23.8% were non-families. Of all households 16.5% were made up of individuals and 3.7% had someone living alone who was 65 years of age or older. The average household size was 3.13 and the average family size was 3.51.

Residents of Dumfries are currently represented in the Virginia House of Delegates by L. Scott Lingamfelter.

All content from Kiddle encyclopedia articles (including the article images and facts) can be freely used under Attribution-ShareAlike license, unless stated otherwise. Cite this article:
Dumfries, Virginia Facts for Kids. Kiddle Encyclopedia.