Kids Encyclopedia Facts
Not to be confused with King William County, Virginia.

Prince William County is a county on the Potomac River in the Commonwealth of Virginia. As of the 2010 census, the population was 402,002, on 1 July 2015, the population was estimated to be 451,721, making it Virginia's second-most populous county. Its county seat is the independent city of Manassas.

A part of Northern Virginia, Prince William County is part of the Washington-Arlington-Alexandria, DC-VA-MD-WV Metropolitan Statistical Area. In 2012 it had the seventh highest income of any county in the United States. It was Virginia's first majority-minority county, with Caucasian, Asian, Hispanic and, African American the chief groups.

The Bureau of Economic Analysis combines the independent cities of Manassas and Manassas Park with Prince William County (within which the two cities are enclaves) for statistical purposes: 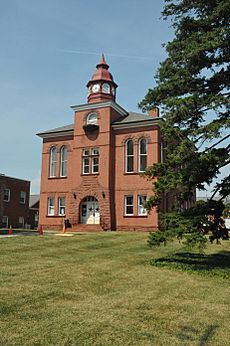 At the time of European encounter, the main inhabitants of the area that would become Prince William County were the Doeg, an Algonquian-speaking sub-group of the Powhatan tribal confederation. When John Smith and other English explorers ventured to the upper Potomac River beginning in 1608, they recorded the name of a village the Doeg inhabited as Pemacocack (meaning "plenty of fish"). It was located on the west bank of the Potomac River about 30 miles south of present-day Alexandria. Unable to deal with European diseases and firepower, the Doeg had abandoned their villages in the area by 1700.

Prince William County was created by an act of the General Assembly of the colony of Virginia in 1731; it was organized largely from the western section of Stafford County as well as a section of King George County. The area encompassed by the act creating Prince William County originally included all of what later became the counties of Arlington, Fairfax, Fauquier, and Loudoun; and the independent cities of Alexandria, Fairfax, Falls Church, Manassas, and Manassas Park. These later became independent jurisdictions. The county was named for Prince William, Duke of Cumberland, the third son of King George II.

In 1790 the population of the county was 58% white; most of the remainder was black and enslaved. The county had been an area of tobacco plantations, where crops were being changed to mixed crops due to soil exhaustion and changes in the market. In the first two decades after the Revolution, the number and percentage of free blacks increased in Virginia as some whites freed their slaves, based on revolutionary ideals. Most free people of color in the state were descended from colonial unions between white women and African-American men, slave, indentured servant or free. Under colonial law since 1662, children took the status of their mother, so children born to white women were free, even if of mixed race.

The county was rural and agricultural for decades. The population into the early 20th century was centered in two areas, one at Manassas (home to a major railroad junction), the other near Occoquan and Woodbridge along the Potomac River. Beginning in the late 1930s, a larger suburban population was attracted to new housing that was developed near the existing population centers, particularly in Manassas.

In 1960 the population was 50,164, but suburbanization caused that to increase rapidly in the following decades, supported by expansion of federal, military and commercial activities in Northern Virginia in the late 20th century. By 2000, this was the third-most populous local jurisdiction in Virginia. From 2000 to 2010, the population increased by 43.2%. This was the first county in Virginia to be minority-majority: the new majority is composed of Hispanic (of any race, largely of Central and South American ancestry), African American, and Asian. In 2012 it was the seventh-wealthiest county in the country. The estimated population of 2014 is more than 437,000.

The Marine Corps Heritage Museum and the Hylton Performing Arts Center opened in the 21st century. The American Wartime Museum is also to be located in this county. During the commemoration of the Sesquicentennial of the Civil War, re-enactment of the famous First and Second Battles of Manassas was planned.

According to the U.S. Census Bureau, the county has a total area of 348 square miles (900 km2), of which 336 square miles (870 km2) is land and 12 square miles (31 km2) (3.5%) is water. It is bounded on the north by Loudoun and Fairfax Counties; on the west by Fauquier County; on the south by Stafford County; and on the east by the Potomac River (Charles County, Maryland lies across the river).

Also according to census figures, there were 130,785 households in Prince William County as of April 1, 2010. According to the Census Bureau’s 2009 American Community Survey, 76.1% of the County’s households are occupied by families, (compared to 66.5% in the United States). This represents a decrease of 4.6 percentage points since 1990, when 80.7% of households in the County were families. Approximately 42.2% of Prince William County’s households are family households occupied by parents with their own children under 18 years of age. 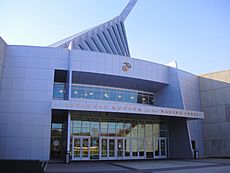 The National Museum of the Marine Corps in November 2010. 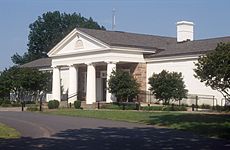 Two National Parks lie within the county. Prince William Forest Park was established as Chopawamsic Recreational Demonstration Area in 1936 and is located in eastern Prince William County. This is the largest protected natural area in the Washington, D.C. metropolitan region at over 15,000 acres (6,070 ha). Manassas National Battlefield Park, located north of Manassas in Prince William County, preserves the site of two major American Civil War battles: the First Battle of Manassas on July 21, 1861, and the Second Battle of Manassas which was fought between August 28 and August 30, 1862. Outside the South, these battles are commonly referred to as the first and second battles of Bull Run.

The county is traversed by many major highways and roads, including the following:

Manassas Regional Airport lies near its namesake city; for commercial passengers, both Dulles Airport and Ronald Reagan Washington National Airport are located nearby.

Public busing in the county is provided by the Potomac and Rappahannock Transportation Commission. Services provided by PRTC include OmniRide, OmniLink, and OmniMatch. 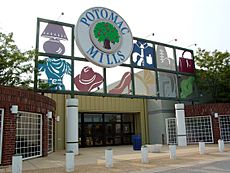 All content from Kiddle encyclopedia articles (including the article images and facts) can be freely used under Attribution-ShareAlike license, unless stated otherwise. Cite this article:
Prince William County, Virginia Facts for Kids. Kiddle Encyclopedia.