Haymarket is a town in Prince William County, Virginia, United States. The population was 1,782 at the 2010 census, a total that was estimated to have decreased to 1,715 in 2018. 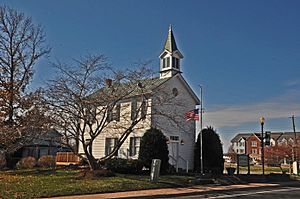 Built in 1883 in Greek Revival and Victorian style to act as both a schoolhouse and town hall, in 2001 it became the Haymarket Museum.

Haymarket owes its location to the Iroquois as the center of the town was their hunting path. It was used until 1722, when a treaty forced the Iroquois into the Blue Ridge Mountain region. Due to the use of the area as hunting paths, the location, and later the town, was given the nickname The Crossroads.

The town of Haymarket was formally founded in 1799 on the land of William Skinker. The Virginia General Assembly gave Skinker the rights to lay out the town, which he drew to consist of 13 streets and 140 lots. Shortly after, a clerk's office and jail were constructed sometime in 1801, as the town had been selected to be the home for a now district court. Today St. Paul's Church stands in its location. The town owes its early thrive in business to the court.

Six years later in 1807, the Virginia General Assembly abolished the district court in favor of the circuit court system that was to be located at each county seat. Until 1830 the court house remained the focal point of the town while serving multiple purposes. In 1830, the court house was converted into and deeded an Episcopal church, three years later in 1833 being consecrated St Paul's.

During the Civil War, on November 4, 1862, Union troops invaded Haymarket, setting the entire town ablaze. Only four buildings survived: three small houses and St. Paul’s Church. For the remainder of the war, Haymarket remained mostly unpopulated. There were only two more incidents, a skirmish on October 19, 1863, involving the Second Brigade, Second Division, Fifth Army Corp, and June 1863. They both involved the Confederate cavalry.

Haymarket was incorporated in 1882, the second town in Prince William County to do so. The first mayor elected was Mr. Garrett Hulfish and the first councilmen elected were Mr. T.A. Smith, Mr. Charles Jordan, and Mr. William W. Meade. In May 1882 during the council's second meeting, the rudimentary ordinances were drafted and adopted.

From 1882 to today, much of central Haymarket has remained the same. The town borders U.S Route 15. While no schools are located with the town, the area is now home to 5 schools – all part of the Prince William County School System. In the 1970s during the construction of the Interstate System, Haymarket became Exit 40 of Interstate 66, giving way to the town's movement away from a rural town, as well as its population boom. In the early 1990s The Walt Disney Company drafted plans to build a theme park near Haymarket, named Disney's America. Due to opposition from various groups and other factors, the project was cancelled.

In addition to St. Paul's Church, Evergreen, Locust Bottom, Mt. Atlas, and Old Town Hall and School are listed on the National Register of Historic Places.

According to the United States Census Bureau, the town has a total area of 0.5 square miles (1.3 km2), all of it land.

The median income for a household in the town was $141,488; the per capita income was $47,420. Haymarket's zip code 20169 is the wealthiest in Prince William County.About 3.6% of the population were below the poverty line.

The largest Pick Your Own Spring flower Festival in the United States is located just two miles from downtown Haymarket. Late March/Early April marks the start of the 3-week festival at Burnside Farms. Close to 500,000 bulbs are planted for one of the most spectacular picking fields in the Country.

Interstate 66 is the primary highway serving Haymarket. It extends westward to Interstate 81 near Front Royal, and eastward to Washington, D.C., with connections to Interstate 95 via Interstate 495. North-south travel is provided via U.S. Route 15, which skims the northwest side of town. US 15 connects north to Leesburg and south to Warrenton. Virginia State Route 55 also passes through Haymarket, serving as a local service road for I-66 and acting as Main Street within Haymarket.

All content from Kiddle encyclopedia articles (including the article images and facts) can be freely used under Attribution-ShareAlike license, unless stated otherwise. Cite this article:
Haymarket, Virginia Facts for Kids. Kiddle Encyclopedia.