Warrenton is a town in and the county seat of Fauquier County, Virginia in the United States. The population was 9,611 at the 2010 census, up from 6,670 at the 2000 census. The estimated population in 2019 was 10,027. It is at the junction of U.S. Route 15, U.S. Route 17, U.S. Route 29, and U.S. Route 211. The town is in the Piedmont region of Virginia, just east of the Blue Ridge Mountains. The well-known Airlie Conference Center is 3 miles (5 km) north of Warrenton, and the historic Vint Hill Farms military facility is 9 miles (14 km) east. Fauquier Hospital is located in the town. Surrounded by Virginia wine and horse country, Warrenton is a popular destination outside Washington, D.C.

Warrenton shares some services with the county, such as schools and the county landfill. The area was home to Bethel Military Academy.

The settlement which would grow into the town of Warrenton began as a crossroads at the junction of the Falmouth-Winchester and Alexandria-Culpeper roads, where a trading post called the Red Store was located. In the 1790s, a courthouse was built in the area, and the location was known as "Fauquier Courthouse".

The Town of Warrenton was incorporated on January 5, 1810, and named for General Joseph Warren, a Revolutionary War hero. Richard Henry Lee donated the land for the county seat. John S. Horner, Secretary of Wisconsin Territory and Acting Governor of Michigan Territory, was born in Warrenton. John Marshall, the fourth Chief Justice of the U.S. Supreme Court, was from Germantown, modern-day Midland, 10 miles (16 km) south of Warrenton.

Confederate Colonel John S. Mosby made raids in the town during the Civil War and later made his home and practiced law in Warrenton. The Warren Green Hotel building hosted many famous people, including the Marquis de Lafayette, James Monroe, Andrew Jackson, Henry Clay, President Theodore Roosevelt, and divorcée Wallis Simpson. Union General George B. McClellan bade farewell to his officers November 11, 1862, from the steps of the hotel. It now hosts some offices of the Fauquier County government.

In 1909, a fire destroyed almost half the structures in the town, and was halted with the use of dynamite to create a firebreak to stop the flames from spreading.

In 1951, the federal government established the Warrenton Training Center just outside Warrenton. The center is a secret Central Intelligence Agency communications facility, which also houses an underground relocation bunker containing communications infrastructure to support continuity of government in the event of a nuclear attack on Washington, DC.

A bypass route around the town was built in the early 1960s, which attracted restaurants, gas stations, and shopping centers, but also drew businesses away from the center of town.

The Warrenton Historic District was listed on the National Register of Historic Places in 1983. Other listings in or near Warrenton include Brentmoor, Dakota, Hopefield, Loretta, Monterosa, North Wales, The Oaks, the Old Fauquier County Jail, and Yorkshire House.

According to the United States Census Bureau, Warrenton has a total area of 4.5 square miles (11.7 km2), of which 0.004 square miles (0.01 km2), or 0.13%, is water. The eastern, southern, and northern parts of the town drain east to Cedar Run, a tributary of the Occoquan River and part of the Potomac River watershed, while the western part of town drains south via Great Run to the Rappahannock River.

The climate in this area is characterized by hot, humid summers and generally mild to cool winters. According to the Köppen Climate Classification system, Warrenton has a humid subtropical climate, abbreviated "Cfa" on climate maps. 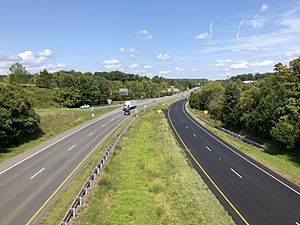 US 15/US 29 northbound in Warrenton

Warrenton is served by several significant highways, including U.S. Route 15, U.S. Route 17, U.S. Route 29 and U.S. Route 211. US 15 extends north and south, heading towards Leesburg in the north and Orange to the south. US 17 is oriented northwest to southeast, connecting to Winchester to the northwest and Fredericksburg to the southeast. US 29 is oriented northeast to southwest, reaching Washington, D.C. to the northeast and Charlottesville to the southwest. Finally, US 211 extends westward, passing through Luray. All four highways originally passed directly through the center of town and now follow bypasses. However, downtown Warrenton is now served by U.S Route 15 Business, U.S Route 17 Business, U.S Route 29 Business and U.S Route 211 Business.

All content from Kiddle encyclopedia articles (including the article images and facts) can be freely used under Attribution-ShareAlike license, unless stated otherwise. Cite this article:
Warrenton, Virginia Facts for Kids. Kiddle Encyclopedia.