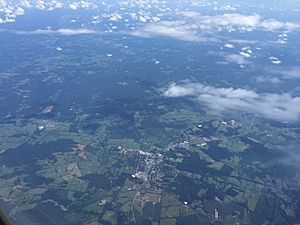 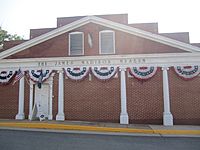 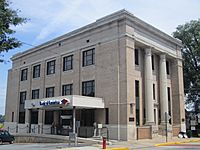 Bank of America in Orange 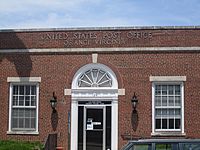 The County Courthouse in Orange

The Holladay House in Orange

This area of the Piedmont was occupied by Siouan-speaking peoples at the time of European encounter. Tribes located in coastal areas generally spoke Algonquian languages.

The present-day Town of Orange was known as the Town of Orange Court House prior to the late-nineteenth century. Following the establishment of Culpeper County from a part of Orange County in 1749, the courthouse was relocated to Orange Court House from elsewhere in the county. The court convened in the house of man named Timothy Crosthwait until 1752; after Crosthwait deeded the 2 acres to the county, it constructed a new courthouse on the property. The town at that time consisted of the courthouse and its related public buildings, a few houses and stores, a tavern and little else. The first U.S. Post Office was constructed in the town in 1796. In 1801-1804 the courthouse was replaced with a new building, clerk’s office and, later, a new jail.

In 1799 Paul Verdier purchased the property of William Bell, an 18th-century farm that included much of the modern-day Town of Orange adjacent to Main Street, near present-day Bellevue and Peliso avenues. Verdier divided the land into lots, which helped shape the town’s pattern of development. His house, which he named Montpeliso, still stands on the land. Growth continued into the nineteenth century as new roadways were constructed through the town. Along with expanding agricultural markets, the roads helped transform Orange Court House into a regional center. In 1834 the Virginia General Assembly to pass an act allowing for the incorporation of the Town of Orange Court House. But, the act never had implementing legislation.

Orange Court House continued growing, with several significant downtown buildings being constructed from this point up to the Civil War, including the Sparks Building (1829) the Holladay House (1830), and the St. Thomas Episcopal Church (1833). These buildings still stand as part of the Orange Commercial Historic District.

In 1847 the Orange and Alexandria Railroad chose to route their new railway from Alexandria to Gordonsville through Orange. The county court granted the railroad right-of-way through the courthouse property, which required the courthouse to be moved to another location.

The fourth and current courthouse was completed in 1859 in the Italian Villa architectural style and stands today on the corner of Madison Rd and Main St. It was added to the National Register of Historic Places in 1979. The General Assembly passed an act in 1855 which officially incorporated the Town of Orange Court House, but it did not take effect until a majority of citizens qualified to vote consented, which did not occur until after the Civil War.

Orange was a strategically important location during the American Civil War. Just north of town, the Rapidan River was effectively the northern border of the Confederacy from March 1862 to May 1864. Consequently, the area witnessed countless troop movements, patrols, skirmishes, and encampments. In addition, the Town of Orange served as General Robert E. Lee's headquarters during that time. General Lee worshipped at the St. Thomas Episcopal Church on Caroline Street, which still stands. This church is also significant as it served as a hospital for Confederate wounded after the Battle of Chancellorsville and the Battle of the Wilderness. Lee passed by this church many times during his stay in Orange. Mort Künstler, an artist of American historical subjects, immortalized this scene in his painting Soldier of Faith.

County records dating back to its founding in 1734 were protected by a clerk of court removing them to “a place of safety” as Federal troops were moving through Orange and towards Richmond.

Numerous buildings constructed soon after the Civil War stand in the downtown historic district. Following Virginia’s readmission to the Union in 1870, Orange Court House officially became a town in 1872 when the petition (required by the 1855 General Assembly act) for an election of town trustees was filed in the court. The first town council meeting was held on June 28, 1872. In 1890 the village changed its name officially to the current-day Town of Orange.

The economy and population continued to grow up until the time of the 1909 fire, which destroyed most of the eastern portion of town. Like nearby Gordonsville, Orange’s importance as a railroad hub began declining in the early twentieth century. Due to its location at the confluence of two major roadways and the establishment of the Orange Automobile Club in 1910, the town became a regional center for automobile sales and services. Its accessibility allowed it to maintain a relatively healthy economy through the Great Depression.

A notable company in Orange during that period was American Silk Mills, Inc., which was established in 1929 and processed raw silk into a finished material. During World War II, the mill was awarded a presidential citation for its production of parachutes for Allied troops. Although much of the mid-20th century industry moved to other locations, the population of Orange has grown steadily up through the 2010 census.

As of September 2013, Orange County contained 33 places listed on the National Register of Historic Places, seven of which are within the Town of Orange.

Out of the 1,779 households, 27.5% had children under the age of 18 living with them, 36.0% were married couples living together, 18.2% had a female householder with no husband present, 5.3% had a male householder with no wife present, and 40.15 were non-families. Householders living alone accounted for 34.2% of the total households and 30.4% had a resident who was 65 years of age or older. The average household size was 2.32 and the average family size was 2.93.

Of the population of 3,761 persons age 16 and older, 57.2% were in the labor force; all worked in civilian occupations.

The primary roadways serving Orange are U.S. Route 15 and Virginia State Route 20. U.S. 15 extends north and south, connecting Orange to Culpeper to the north and Gordonsville to the south. SR 20 extends more east and west (though is also signed north/south), connecting to Charlottesville to the west and heading towards Fredericksburg in the east. Virginia Regional Transit operates the Town of Orange Transit (TOOT), as well as a connecting service to Culpeper.

All content from Kiddle encyclopedia articles (including the article images and facts) can be freely used under Attribution-ShareAlike license, unless stated otherwise. Cite this article:
Orange, Virginia Facts for Kids. Kiddle Encyclopedia.