The Plains, Virginia facts for kids

The Plains is a town in Fauquier County, Virginia, United States. The population was 217 at the 2010 census, down from 266 at the 2000 census. It is centered on the intersection of Virginia Route 55 (John Marshall Highway) and Virginia Route 245 (Old Tavern Road). The mayor of The Plains is Blake Gallagher.

According to the United States Census Bureau, the town has a total area of 0.3 square miles (0.7 km2), all of it land.

There were 110 households out of which 25.5% had children under the age of 18 living with them, 44.5% were married couples living together, 14.5% had a female householder with no husband present, and 35.5% were non-families. 31.8% of all households were made up of individuals and 10.9% had someone living alone who was 65 years of age or older. The average household size was 2.42 and the average family size was 3.01. 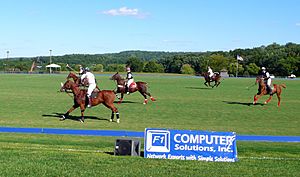 Polo match at Great Meadow in 2007

The Plains is home to Great Meadow, a large open-air and open-field facility that hosts several large events throughout the year, including the Virginia Gold Cup steeplechase horse race, which attracts over 50,000 guests on the first Saturday of each May.

Archwood Green Barns Farmer's Market features fresh, home made and local products. Hours are Sunday, 10:00 a.m. to 3:00 p.m. beginning the last Sunday in April through the 2nd Sunday in November. It is open the first two Sundays in December for the "Christmas on the Farm" show.

A museum exhibit, "Footprint to Change", is located at 4243 Loudoun Avenue near the train tracks that go through town. The building houses the Afro-American Historical Association of Fauquier County offices, library and archives as well as the museum.

Long Branch Baptist Church (est. 1786), the third oldest Baptist church in Virginia, lies 4 miles (6 km) north of The Plains in the unincorporated area called Halfway. The evangelist William Broaddus, founder of Southwestern Seminary in Louisville, Kentucky, was pastor there in the 1830s. His nephew John Broadus is often called "the father of homiletics" (preaching).

Wakefield School, a pre-school through Grade 12 independent school, is located just south of the town limits.

Actor Robert Duvall once owned a restaurant in The Plains called "The Rail Stop". He still makes his residence north of town at his 360-acre (1.5 km2) Brindley Farm.

The town is also home to a seasonal corn maze owned and operated by locals.

The National Association of Rocketry held NARAM-50 there in the summer of 2008.

The Masonic lodge was organized on a site near the present post office. The Plains Lodge U.D. held its first meeting on December 29, 1898, and continued to work "Under Dispensation" until the Grand Lodge of Virginia met in Alexandria on December 15, 1899, and issued the lodge a charter under the name of Cochran Lodge No. 271.

Beverley Mill was listed on the National Register of Historic Places in 1972, and most of the town was listed as The Plains Historic District in 2014.

The climate in this area is characterized by hot, humid summers and generally mild to cool winters. According to the Köppen Climate Classification system, The Plains has a humid subtropical climate, abbreviated "Cfa" on climate maps.

All content from Kiddle encyclopedia articles (including the article images and facts) can be freely used under Attribution-ShareAlike license, unless stated otherwise. Cite this article:
The Plains, Virginia Facts for Kids. Kiddle Encyclopedia.