Gainesville is a census-designated place (CDP) in western Prince William County, Virginia, United States. The population was 11,481 in the 2010 census.

Gainesville was once a changing point for stagecoach horses on the Fauquier & Alexandria Turnpike. In 1752, Thomas Jefferson reached the area and the stop became Gainesville. It was a shipping point for grain, timber, and cattle and remained a major cattle shipping point into the early 1960s. During the American Civil War, nearby Thoroughfare Gap in the Bull Run Mountains served as a path for soldiers to reach the First and Second battles of Bull Run. In 1994, the groundbreaking for Gainesville's first townhome community began; it was named Crossroads. This marked the beginning of mass-development for Gainesville.

In 2006, VDOT began working on the Gainesville Interchange improvement project in order to ease the traffic in the rapidly growing Gainesville-Haymarket area. It was completed in 2015. 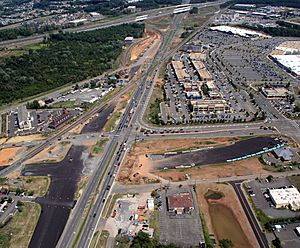 Aerial view of the Gainesville Interchange 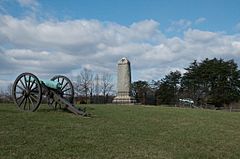 Danica Roem represents Gainesville in the Virginia House of Delegates.

Major commercial and residential development has taken place since 2000, resulting in Gainesville having six large shopping centers. The intersection of I-66 and Lee Highway (29 Highway) has the largest shopping center with big box stores, such as Target Supercenter, Lowe's, Best Buy, DSW, Walgreens, and many other stores and restaurants. Somerset Crossing has a Bank Of America, Wells Fargo, and other shops. Close to US-15 are a Staples, Ross, Wegmans Food Markets, Michael's, and Harris Teeter. The Promenade at Virginia Gateway was developed by The Peterson Companies, including BJ's Warehouse, which opened in January 2012, and Regal Theaters which opened in late 2013.

A proposed Haymarket / Gainesville railway station extension for the VRE was scheduled to open in 2022, connecting the region via commuter rail to Fairfax County, Manassas, and Washington, D.C. However the project was voted down by the VRE Operations Board, in favor of expanding services to the existing station in Broad Run.

All content from Kiddle encyclopedia articles (including the article images and facts) can be freely used under Attribution-ShareAlike license, unless stated otherwise. Cite this article:
Gainesville, Virginia Facts for Kids. Kiddle Encyclopedia.