Strasburg is a town in Shenandoah County, Virginia, United States, which was founded in 1761 by Peter Stover. It is the largest town by population in the county and is known for its grassroots art culture, pottery, antiques, and American Civil War history. The population was 6,398 at the 2010 census.

German-speaking Pennsylvanians were among the first non-native settlers to arrive in the northern Shenandoah Valley and Strasburg area. The luscious greenery and fertile land were prime targets for immigrant farmers. On August 21, 1734 speculator Henry Willis was granted 2,030 acres (8.2 km2) total of this land by William Gooch, Virginia's Lieutenant Governor and Commander in Chief. Gooch wished to settle the valley to create a buffer between Native American tribes and the rest of the Virginia colony. During the summer of 1735, Willis sold his entire property to Jacob Funk. Jacob in return, partitioned his new purchase, reselling a part of it to his brother John.

In contrast to the English culture found east of the Blue Ridge, Strasburg was settled with family farms and towns rather than plantations; few slaves; and Germanic language, religions, architecture and decorative arts. The thriving agricultural community that developed in the fertile bottomland along the banks of the Shenandoah River boasted scenic views of the Massanutten and Allegheny Mountains. Later nicknamed “Pot Town,” Strasburg also became a center for the production of both utilitarian and fancy earthenware and stoneware pottery. During the 19th and 20th centuries, many residents worked for the railroad industry and at limestone quarries; after WW II, other industries came to Strasburg, including paper and auto parts manufacture. Today Strasburg boasts a growing service economy, museums, charming eateries, numerous antique stores and other shops. Despite its location only 80 miles from Metro D.C. Strasburg has maintained its hospitable small town charm.

Peter Stover (Petrus Stauffer) is considered the founder of the town of Strasburg. Stover was born in 1715 to a German-Swiss father, Christian Stauffer I., in Mannheim, Baden-Württemberg, Germany. Stauffer took his family to America in 1718, to gain religious freedom, and settled in Montgomery County, Pennsylvania where he would live out his entire life.

His son Peter migrated south to Virginia by 1730 and to the Shenandoah Valley as early as 1739. On May 2, 1749 Stover purchased 483 acres (1.95 km2) of land from Jacob Funk, his future father-in-law. The purchase was divided into smaller plots for sale to other settlers and a village was informally established.

Peter eventually married Frainey Funk, before he died August 13, 1799 at the age of 84. He was survived by eight children. Being a philanthropist for most of his life, Stover's will left land and $10,000 to the community to establish schools. A monument resides in Strasburg's Riverview Cemetery honoring Peter Stover, but the whereabouts of his grave is unknown.

Strasburg has experienced rapid growth along its northern corridor due to the fact that Washington D.C. is approximately 80 miles away. 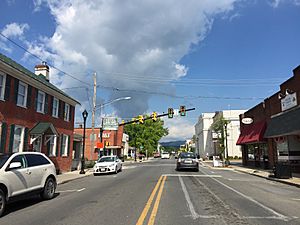 The most heralded museum in Strasburg is the Strasburg Museum. The building was once home to the Strasburg Stone and Earthenware Manufacturing Company and later was converted to a Southern Railway depot. It operated in this manner until the early 1960s. In 1970 it opened as a museum.

Former attractions include the Jeane Dixon Museum and Library and the Museum of American Presidents.

Strasburg is home to the nonprofit organization Staufferstadt Arts, which facilities the installation of contemporary murals within downtown. So far murals have been placed by well known street artists Gilf!, Alice Mizrachi, and NDA.

Strasburg holds two festivals each year: Mayfest and Oktoberfest. The town's Mayfest is traditionally held the third weekend in May and includes arts and craft vendors, a variety of food vendors, business and civic organizations, a parade, and an old-fashioned carnival complete with rides. To celebrate the area's German roots, an Oktoberfest takes place each autumn, the first Saturday in October. This event offers food concessions, beer and wine gardens, activities for children and adults, music, and street dancing. Although the festival still offers German food and beer, the festival has been modernized and no longer emphasizes Bavarian culture.

Popular destinations include Christina's Café, an American/Tex-Mex restaurant. The café offers music on weekends. Past performances have included Americana, folk, blues, and bluegrass. Other popular destinations include the Strasburg Antique Emporium and Flea Market and the Iron Rose bohemian clothing and accessories shop. Iron Rose is run by Danni Leigh, a Nashville country and western star and native of Strasburg. Danni's husband Mike runs the nearby guitar and music shop Frets and Friends.

Strasburg offers overnight accommodations at Hotel Strasburg, housed in a Victorian building dating to 1902. The building was once used as a private hospital. Local legend says the hotel is haunted. The hotel includes an English pub, The Depot Lounge. 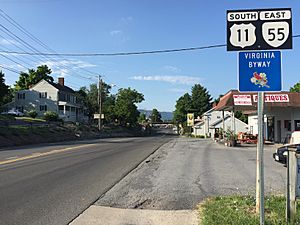 The western extension of Norfolk Southern Railway's B-Line runs through Strasburg, though that section of the line usually only sees one short local train—ranging from once a week to once a day—which stops at the R.R. Donnelley plant in the town. South of its interchange with CSX at Strasburg Junction, the line is completely dormant. The CSX line also receives only sporadic local traffic.

All content from Kiddle encyclopedia articles (including the article images and facts) can be freely used under Attribution-ShareAlike license, unless stated otherwise. Cite this article:
Strasburg, Virginia Facts for Kids. Kiddle Encyclopedia.