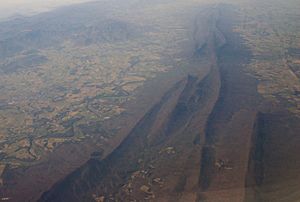 Oblique air photo of Massanutten Mountain, looking southwest. The south fork of the Shenandoah River is visible to the left, as well as a part of the Blue Ridge Mountains.

Massanutten Mountain is a synclinal ridge in the Ridge-and-Valley Appalachians, located in the U.S. state of Virginia. It is near the West Virginia state line. 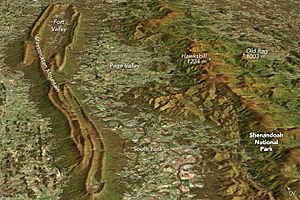 Image displaying the topographical differences between two roughly parallel ridges along Virginia's western border: one is the backbone of Shenandoah National Park (right), and the other is Massanutten Mountain (middle/left) both rise above the Shenandoah Valley's rolling lowlands, with Massanutten dividing the valley roughly in half.

Most of the range is part of the Lee Ranger District of the George Washington National Forest and contains the Elizabeth Furnace and Camp Roosevelt recreational areas. The Potomac Appalachian Trail Club maintains the Massanutten Trail as well as several other hiking trails in the forest. Signal Knob, a former Civil War signal station on the northern peak of the mountain, is a popular destination. The forest service also maintains several ATV trails.

In 1971, the Massanutten Mountain ski lodge and four-season resort village was established near the southern peak. The private resort has nearly doubled in size since Great Eastern Resorts bought it in 1995.

All content from Kiddle encyclopedia articles (including the article images and facts) can be freely used under Attribution-ShareAlike license, unless stated otherwise. Cite this article:
Massanutten Mountain Facts for Kids. Kiddle Encyclopedia.