Bull Run is a 32.8-mile-long (52.8 km) tributary of the Occoquan River that originates from a spring in the Bull Run Mountains in Loudoun County, Virginia, and flows south to the Occoquan River. Bull Run serves as the boundary between Loudoun County and Prince William County, and between Fairfax County and Prince William County.

Bull Run is primarily associated with two battles of the American Civil War: the First Battle of Bull Run (July 21, 1861) and the Second Battle of Bull Run (August 28–30, 1862), both Confederate victories. A narrow part of the creek called Yates Ford (near Manassas) is the scene of the Battle of Occoquan, and downstream about one mile is the current Yates Ford Road bridge between Fairfax and Prince William counties. 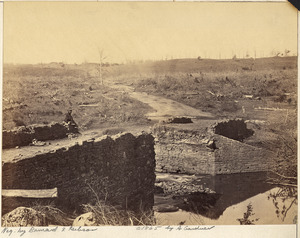 The ruins of the stone bridge over Bull Run, after the Second Battle of Bull Run, 1862, photographer unknown, from the National Archives and Records Administration

All content from Kiddle encyclopedia articles (including the article images and facts) can be freely used under Attribution-ShareAlike license, unless stated otherwise. Cite this article:
Bull Run (Occoquan River tributary) Facts for Kids. Kiddle Encyclopedia.