The Occoquan River is a tributary of the Potomac River in Northern Virginia, where it serves as part of the boundary between Fairfax and Prince William counties. The river is a scenic area, and several local high schools and colleges use the river for the sport of rowing.

The river is 24.7 miles (39.8 km) long, and its watershed covers about 590 square miles (1,528 km2). It is formed by the confluence of Broad Run and Cedar Run in Prince William County; Bull Run, which forms Prince William County's boundary with Loudoun and the northerly part of Fairfax counties, enters it east-southeast of Manassas, as the Occoquan turns to the southeast. It reaches the Potomac at Belmont Bay. The Occoquan River is part of the Chesapeake Bay watershed. The name Occoquan is derived from a Doeg Algonquian word translated as "at the end of the water". 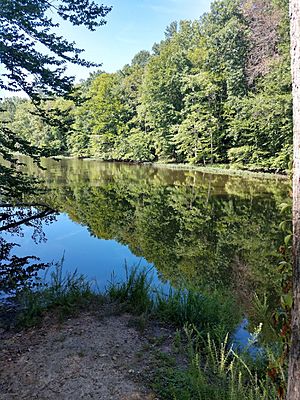 Wolf Run Shoals on the Occoquan.

Geographers, foremost Harm de Blij, defined the river as the most apt border between the American North and American South. Wolf Run Shoals was an important crossing point on the Occoquan between Alexandria and Richmond during the 18th and 19th centuries. It consisted of three islands and a mill, now submerged under the Occoquan due to higher water levels following damming for flood control, water supply, and power generation.

Between c. 1900 and 1976, the Occoquan was frequently called "Occoquan Creek," but a campaign to restore its status as a river was successfully conducted by Rosemary Selecman.

The Occoquan has three dams along its length. The first is at the town of Occoquan, a reservoir belonging to the Fairfax County Water Authority, which serves as a source of drinking water for parts of Fairfax and Prince William counties. The Occoquan Reservoir stretches from Occoquan to Bull Run. Further upriver is Lake Jackson. The dam that creates Lake Jackson is at Virginia State Route 234, Dumfries Road, and is a former hydroelectric facility. Today the dam contains the lake, but has not produced electricity in several decades. There is a third dam up Broad Run from its confluence with Cedar Run; this dam forms Lake Manassas, which is the primary water supply for the city of Manassas.

All content from Kiddle encyclopedia articles (including the article images and facts) can be freely used under Attribution-ShareAlike license, unless stated otherwise. Cite this article:
Occoquan River Facts for Kids. Kiddle Encyclopedia.