Occoquan is a town in Prince William County, Virginia. The population was 759 at the 2000 United States Census, but as of the census of 2010, there were 934 people residing in the town of Occoquan. The town is a suburb of Washington, D.C. and is adjacent to Woodbridge. The current mayor is Liz Quist.

Occoquan is derived from an Algonquian Doeg Indian word, meaning "at the end of the water". Located on the Occoquan River, Occoquan was long a site of indigenous peoples' habitation. Like the British colonists after them, they relied on the river for transportation and trade, as well as fish. 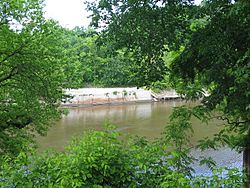 The Occoquan River as it passes the town

By 1765, Anglo-American colonists had established an industrial settlement at Occoquan, with grist mills and tobacco warehouses. The Merchant's Mill was the first automated grist mill in the nation. It operated for 175 years until destroyed by fire.

During the Civil War, the post office passed letters and packages between North and South. River silting reduced ship traffic to Occoquan and ended its days as a port, as did the shift in traffic to railroads.

The town has survived and thrived. Today, it is a restored artists' community, with shops, outdoor dining, ghost walks, a town boat dock and more. A number of structures in town, including many in the downtown commercial area, are part of the Occoquan Historic District listed on the National Register of Historic Places (NRHP). Rockledge, the former house of the town's founder, is also listed as a significant structure on the NRHP.

Occoquan lies on the south bank of the Occoquan River at the fall line.

There were 418 households out of which 11.5% had children under the age of 18 living with them, 35.6% were married couples living together, 6.2% had a female householder with no husband present, and 55.3% were non-families. 45.9% of all households were made up of individuals and 8.1% had someone living alone who was 65 years of age or older. The average household size was 1.82 and the average family size was 2.54.

As of the census of 2010, there were 934 people residing in the town of Occoquan.

All content from Kiddle encyclopedia articles (including the article images and facts) can be freely used under Attribution-ShareAlike license, unless stated otherwise. Cite this article:
Occoquan, Virginia Facts for Kids. Kiddle Encyclopedia.