Fauquier is a county in the Commonwealth of Virginia. As of the 2020 census, the population was 72,972. The county seat is Warrenton.

Fauquier County is in Northern Virginia and is a part of the Washington metropolitan area. The county is one of the fastest-growing and highest-income counties in the United States. 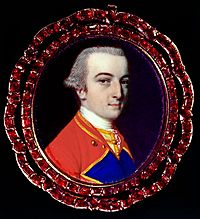 Portrait of Francis Fauquier, for whom Fauquier County was named

In 1608, the first European to explore in the vicinity, Captain John Smith, reported that the Whonkentia (a subgroup of the Siouan-speaking Manahoac tribe) inhabited the area. The Manahoac were forced out around 1670 by the Iroquois (Seneca), who did not resettle the area. The Conoy camped briefly near The Plains, from 1697 to 1699. The Six Nations ceded the entire region including modern Fauquier to Virginia Colony at the Treaty of Albany, in 1722.

Fauquier County was established on May 1, 1759, from Prince William County. It is named for Francis Fauquier, Lieutenant Governor of Virginia at the time, who won the land in a poker game, according to legend.

Fauquier County celebrated its 250th anniversary in 2009 with year-long events. The festivities began with the African-American Historical Association's celebration of Black History Month in February. The grand events took place on May 1 when Main Street was filled with guests and residents who enjoyed entertainment by historians, demonstrations, performances, contests, activities, lectures, Kid’s Corner, and live music. Birthday cakes were assembled and shared with the Fauquier Food Distribution Coalition. Historical site visits included some of the confederate battlefields, and many local churches hosted homecoming celebrations. Festivities concluded on December 31 with First Night Warrenton, a family-oriented event with musical performances, puppet shows and a magician.

The county is exurban. There has been increased growth in Warrenton and New Baltimore in recent years. The subdivisions of Brookside and Vint Hill have facilitated the growth in the eastern part of the county. There is some industry in Fauquier County, however the largest employer in the county is the county government and the hospital. As of the 2000 census, 47% of county residents that work have jobs that are outside the county. The average travel time to work is 39.2 minutes.

All content from Kiddle encyclopedia articles (including the article images and facts) can be freely used under Attribution-ShareAlike license, unless stated otherwise. Cite this article:
Fauquier County, Virginia Facts for Kids. Kiddle Encyclopedia.