Rappahannock County is a county located in the Commonwealth of Virginia, US. As of the 2010 census, the population was 7,373. Its county seat is Washington. The name "Rappahannock" comes from the Algonquian word lappihanne (also noted as toppehannock), meaning "river of quick, rising water" or "where the tide ebbs and flows."

Rappahannock County was founded by an act of the Virginia General Assembly in 1833, based on the growing population's need to have better access to a county seat. The county's land was carved from Culpeper County. Rappahannock county was named for the river that separates it from Fauquier County.

The summits of the following mountains are located within Rappahannock County: 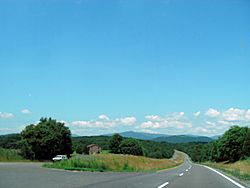 U.S. Route 211 as it passes through Rappahannock County; the Blue Ridge Mountains can be seen in the distance.

All content from Kiddle encyclopedia articles (including the article images and facts) can be freely used under Attribution-ShareAlike license, unless stated otherwise. Cite this article:
Rappahannock County, Virginia Facts for Kids. Kiddle Encyclopedia.