Culpeper County is a county located in the central region of the Commonwealth of Virginia. As of the 2010 census, the population was 46,689. Its county seat and only incorporated community is Culpeper.

Home to many of Virginia's antebellum plantation homes and thousands of acres of farmland, the rolling hills of the Piedmont region and the westernmost flats of the Northern Neck collide in rural Culpeper County.

At the time of European encounter, the inhabitants of the area that became Culpeper County were a Siouan-speaking sub-group of the Manahoac tribe called the Tegninateo. Culpeper County was established in 1749 from Orange County. The county is named for Thomas Colepeper, 2nd Baron Colepeper, colonial governor of Virginia from 1677 to 1683. During the Civil War the Battle of Cedar Mountain took place on August 9, 1862 and the Battle of Brandy Station on June 9, 1863, in Culpeper County.

In May 1749, the first Culpeper Court convened in the home of Robert Coleman, not far from where the Town of Culpeper is now located. In July 1749, 17-year-old George Washington was commissioned as the first County surveyor. One of his first duties was to lay out the County's courthouse complex, which included the courthouse, jail, stocks, gallows and accessory buildings. By 1752 the complex stood at what is now the northeast corner of Davis and Main Streets. The courthouse village was named the Town of Fairfax after Thomas Fairfax, 6th Lord Fairfax of Cameron (1693–1781).

During the Virginia convention held in May 1775, the colony was divided into sixteen districts. Each district had instructions to raise a battalion of men "to march at a minute's notice." Culpeper, Orange and Fauquier, forming one district, raised 350 men in "Clayton's old field" on the Catalpa estate, who came to be called the Culpeper Minute Men. In December, the Minute Men, marching under their flag depicting a rattlesnake and inscribed with the words "Liberty or Death" and "Don't Tread on Me", took part in the Battle of Great Bridge, the first Revolutionary battle on Virginia soil. The Culpeper Minute Men reorganized in 1860 in response to the impending Civil War and became part of 13th Infantry's Company B. The Culpeper Minutemen were again organized for World War I, and joined the 116th Infantry.

Culpeper County is in the foothills of the Blue Ridge Mountains, which are quickly accessed beginning with Old Rag Mountain and the Skyline Drive just up Route 522.

Culpeper County is home to Commonwealth Park, site for many world-class equestrian events. It was here that actor Christopher Reeve suffered his accident during a competition.

Culpeper is home to famous battlefield at Brandy Station and the boyhood home to Civil War General A. P. Hill.

Culpeper was the last County in Virginia to integrate schools.

In April 2016, the county Board of Supervisors denied a routine request from the Islamic Center of Culpeper for a pump and haul permit to serve their envisioned mosque. This act resulted in a lawsuit by the U.S. Department of Justice in December. 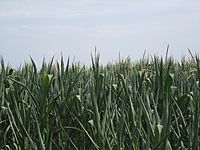 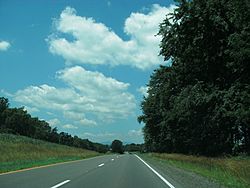 U.S. Route 211 as it passes through Culpeper County

All content from Kiddle encyclopedia articles (including the article images and facts) can be freely used under Attribution-ShareAlike license, unless stated otherwise. Cite this article:
Culpeper County, Virginia Facts for Kids. Kiddle Encyclopedia.