List of colonial governors of Virginia facts for kids

This is a list of colonial (commonwealth) governors of Virginia.

Note: Some of those who held the lead role as governor of Virginia never visited the New World and governed through deputies resident in the colony. Others, such as Thomas West, 3rd Baron De La Warr, held the lead role for many years, but were only in Virginia a short portion of that time, delegating to others most of the time. Probably for those reasons, in many historical documents and references, the deputies and lieutenant governors who had the primary responsibility in Virginia are also often titled simply "governor". Also, transportation from England routinely took several months, and occasionally, much longer. Thus, dates may appear to overlap.

From 1606 until 1624, Proprietary Governors oversaw the operation of the Virginia Colony. Most were styled "President of the Council", although some were styled "governor" by the proprietors. 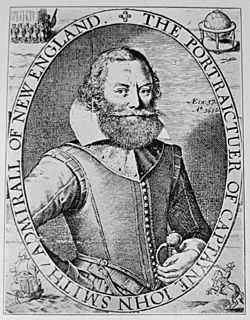 Captain John Smith, from his 1614 map of New England

After the Virginia Company of London lost its proprietary charter in 1624, the colony was taken over by the English Crown, and became a crown colony. Governors were appointed by the ruling monarch to oversee the interests of the Crown. During the interregnum period (1649–1660), when England came under commonwealth rule and the protectorate rule of Oliver and Richard Cromwell, those governments appointed Virginia's governors. William Berkeley, who was governor at the time of the execution of King Charles I, remained in office until the arrival of a Commonwealth fleet in 1651 led to his removal. Berkeley was returned to office by votes of the Virginia assembly and by appointment of the restored King Charles II in 1660.

All content from Kiddle encyclopedia articles (including the article images and facts) can be freely used under Attribution-ShareAlike license, unless stated otherwise. Cite this article:
List of colonial governors of Virginia Facts for Kids. Kiddle Encyclopedia.