Linden is an unincorporated community in Fauquier and Warren counties in the U.S. state of Virginia. It is located west of Washington, D.C. along Interstate 66.

In 1669 the "official" discovery of the Shenandoah Valley was credited to John Lederer and John Catlett at the present day site of Linden. The discovery and mapping of the area helped to open the area for further settlement. A marker at the intersection of VA 55 and SR 638 in Linden help commemorate this event.

From the mid-18th century to the 1950s, the Linden area was home to 25 apple orchards. The Linden Methodist Church was built in 1842 and numerous buildings still exist dating from the 19th century. In November 1954, tragedy struck the Linden church. A fire thought to be the caused by a faulty pipe in the wood-burning stove, destroyed the beautiful 62-year-old wooden structure. Its towering steeple and bell had long been an iconic landmark in the community. The Front Royal Fire Department courageously fought the blaze for four hours before it was squelched. Several heroic men in the Linden community, including Rev. B. L. Lock entered the burning building to salvage the church's antique pulpit, pews and bible. All were relics from a church building that had previously served the congregation.

The fire revealed several graves beneath the church's stone foundation making it very difficult to rebuild at the same site. Therefore, the congregation decided to relocate the Linden church next to the parsonage, on the opposite side of Highway 55. In December 1955, the ground breaking ceremony for the new Linden church at its current location took place. When completed, the new church was furnished with the pulpit and pews that had been rescued from the flames.

The relative ease settlers of crossing the Blue Ridge at the gap also allowed Linden to serve as a point of transit for the armies of both the Union and Confederate States during the United States Civil War. Linden was part of "Mosby's Confederacy" and served as rallying and rest points for the Confederate Rangers Mosby's Rangers under Colonel John S. Mosby. Numerous locations illustrating the daring and tenacity of the band are a short drive from Linden.

A small battle and postscript to the Confederate Gettysburg campaign, the Battle of Manassas Gap occurred a half mile from Linden on July 23, 1863. After retreating across the Potomac River at Williamsport, Maryland, Lee's Army of Northern Virginia withdrew up the Shenandoah Valley. George G. Meade's Army of the Potomac crossed the river east of the Blue Ridge Mountains and followed Lee into Virginia. On July 23, Meade ordered the III Corps, under Maj.Gen. William H. French, to cut off the retreating Confederate columns at Front Royal, Virginia, by forcing passage through Manassas Gap. At first light, French began slowly pushing Brig.Gen. James A. Walker's Confederate brigade (the Stonewall Brigade, part of Maj.Gen. Richard H. Anderson's division) back into the gap. About 4:30 p.m., a strong Union attack drove Walker's men until they were reinforced by Robert E. Rodes's division and artillery. By dusk, the poorly coordinated Union attacks were abandoned. During the night, Confederate forces withdrew into the Luray Valley. On July 24, the Union army occupied Front Royal, but Lee's army was safely beyond pursuit. 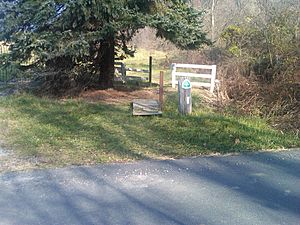 The community is mostly a bedroom community with subdivisions known as High Knob, Apple Mountain Lake, and Blue Mountain. It has two gas stations, three stores, and a restaurant, as well as its own post office with zip code 22642 It is home to the Saint Dominics Monastery, Appalachian Trail access points, along with the G. Richard Thompson Wildlife Management Area.

Linden sits astride the Warren and Fauquier county lines, SR 55 (the John Marshall Highway) and Interstate Highway 66. At 945 feet (288 m) above sea level, it sits at the top of the Manassas Gap in the Blue Ridge Mountains making it a gateway into the Shenandoah Valley today, as it was for early settlers in the area. The Manassas Gap Railroad was completed in 1854, it ran through Linden from Mount Jackson to Manassas Junction giving the town of Manassas its name. Today the tracks form a part of the Norfolk Southern rail system. The popular north-south Appalachian Trail crosses Hwy 55 (John Marshall Hwy) and under I-66 in Linden at County Rd 725 (Tuckers Ln.) as it follows its way along the east side of the Blue Ridge.

While the "village" of Linden sets at 945 feet (288 m) above sea level many of the surrounding attractions and activity areas with road access climb above 2,100 feet (640 m) making for a diverse natural experience.

The soils in Linden are developed from granite, granite gneiss, greenstone and chloritic schist. The terrain ranges from rolling to steep landscapes that are dissected by Goose Creek and its tributaries that feed from runs and springs from the east side of the Blue Ridge Mountains. The rolling uplands contain soils that are loamy to silty and can be shallow to bedrock. On the steeper upland sections the soils are loamy with stones and rock outcrops evident on the surface.

Here is a list of commonly seen local flora and fauna in and around Linden.

All content from Kiddle encyclopedia articles (including the article images and facts) can be freely used under Attribution-ShareAlike license, unless stated otherwise. Cite this article:
Linden, Virginia Facts for Kids. Kiddle Encyclopedia.