The black vulture (Coragyps atratus), also known as the American black vulture, is a bird in the New World vulture family.

Its range is from the southeastern United States to Central Chile and Uruguay in South America. It is a common and widespread species, but less so than the turkey vulture, which breeds well into Canada and south to Tierra del Fuego. Despite the similar name and appearance, this species is unrelated to the Eurasian black vulture. 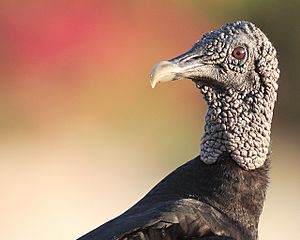 The nostrils are not divided by a septum, but rather are perforate; from the side one can see through the beak. The wings are broad but relatively short. The bases of the primary feathers are white, producing a white patch on the underside of the wing's edge, which is visible in flight. The tail is short and square, barely reaching past the edge of the folded wings. The subspecies differ in size according to Bergmann's Rule, and the amount of white underwing coloration also varies. As it probably forms a cline over its entire range, the species is often considered monotypic.

A leucistic Coragyps atratus brasiliensis was observed in Piñas, Ecuador in 2005. It had white plumage overall, with only the tarsus and tail as well as some undertail feathers being black. It was not an albino as its skin seemed to have had the normal, dark color and it was part of a flock of some twenty normally plumaged individuals. 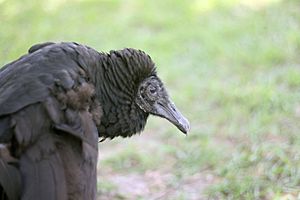 It is usually a permanent resident throughout its range, although birds at the extreme north of its range may migrate short distances, and others across their range may undergo local movements in unfavourable conditions. In South America, its range stretches to central Chile and Argentina. It also is found as a vagrant on the islands of the Caribbean. It prefers open land interspersed with areas of woods or brush. It is also found in moist lowland forests, shrublands and grasslands, wetlands and swamps, pastures, and heavily degraded former forests. Preferring lowlands, it is rarely seen in mountainous areas. It is usually seen soaring or perched on fence posts or dead trees. 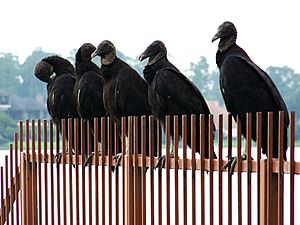 A group perching on a fence

It soars high while searching for food, holding its wings horizontally when gliding. It flaps in short bursts which are followed by short periods of gliding. Its flight is less efficient than that of other vultures, as the wings are not as long, forming a smaller wing area. In comparison with the turkey vulture, the black vulture flaps its wings more frequently during flight. It is known to regurgitate when approached or disturbed, which assists in predator deterrence and taking flight by decreasing its takeoff weight. Like all New World vultures, the black vulture often defecates on its own legs, using the evaporation of the water in the feces and/or urine to cool itself, a process known as urohidrosis. It cools the blood vessels in the unfeathered tarsi and feet, and causes white uric acid to streak the legs. Because it lacks a syrinx, the black vulture, like other New World vultures, has very few vocalization capabilities. It is generally silent, but can make hisses and grunts when agitated or while feeding. The black vulture is gregarious, and roosts in large groups. In areas where their ranges overlap, the black vulture will roost on the bare branches of dead trees alongside groups of turkey vultures. The black vulture generally forages in groups; a flock of black vultures can easily drive a rival turkey vulture, which is generally solitary while foraging, from a carcass.

Like the turkey vulture, this vulture is often seen standing in a spread-winged stance. The stance is believed to serve multiple functions: drying the wings, warming the body, and baking off bacteria. This same behavior is displayed by other New World vultures, Old World vultures, and storks. 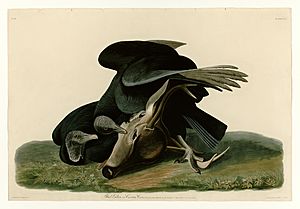 Black vulture pair feeding on a mule deer. Plate 106 from The Birds of America by John James Audubon. 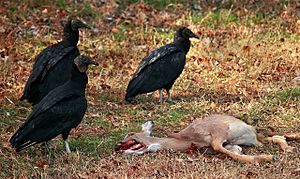 Over a deer carcass

In natural settings, the black vulture eats mainly carrion. In areas populated by humans, it may scavenge at garbage dumps, but also takes eggs and decomposing plant material and can kill or injure newborn or incapacitated mammals. Like other vultures, it plays an important role in the ecosystem by disposing of carrion which would otherwise be a breeding ground for disease. The black vulture locates food either by sight or by following New World vultures of the genus Cathartes to carcasses. These vultures—the turkey vulture, the lesser yellow-headed vulture, and the greater yellow-headed vulture—forage by detecting the scent of ethyl mercaptan, a gas produced by the beginnings of decay in dead animals. Their heightened ability to detect odors allows them to search for carrion below the forest canopy. The black vulture is aggressive when feeding, and may chase the slightly larger turkey vulture from carcasses.

The black vulture also occasionally feeds on livestock or deer. It is the only species of New World vulture which preys on cattle. It occasionally harasses cows which are giving birth, but primarily preys on newborn calves. In its first few weeks, a calf will allow vultures to approach it. The vultures swarm the calf in a group, then peck at the calf's eyes, or at the nose or the tongue. The calf then goes into shock and is killed by the vultures. Black vultures have sometimes been seen to pick ticks off resting capybaras. 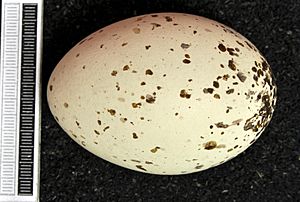 The timing of black vultures' breeding season varies with the latitude at which they live. In the United States, birds in Florida begin breeding as early as January, for example, while those in Ohio generally do not start before March. In South America, Argentinian and Chilean birds begin egg-laying as early as September, while those further north on the continent typically wait until October. Some in South America breed even later than that—black vultures in Trinidad typically do not start until November, for example, and those in Ecuador may wait until February. Pairs are formed following a courtship ritual which is performed on the ground: several males circle a female with their wings partially open as they strut and bob their heads. They sometimes perform courtship flights, diving or chasing each other over their chosen nest site.

The black vulture lays its eggs on the ground in a wooded area, a hollow log, or some other cavity, seldom more than 3 m (10 ft) above the ground. While it generally does not use any nesting materials, it may decorate the area around the nest with bits of brightly colored plastic, shards of glass, or metal items such as bottle caps. Clutch size is generally two eggs, though this can vary from one to three. The egg is oval and on average measures 7.56 cm × 5.09 cm (2.98 in × 2.00 in). The smooth, gray-green, bluish, or white shell is variably blotched or spotted with lavender or pale brown around the larger end. Both parents incubate the eggs, which hatch after 28 to 41 days. Upon hatching, the young are covered with white down. Both parents feed the nestlings, regurgitating food at the nest site. The young remain in the nest for two months, and after 75 to 80 days they are able to fly skillfully. Predation of black vultures is relatively unlikely, though eggs and nestlings are readily eaten if found by mammalian predators such as raccoons, coatis and foxes. Due to its aggressiveness and size, few predators can threaten the fully-grown vulture. However, various eagles may kill vultures in conflicts and even the ornate hawk-eagle, a slightly smaller bird than the vulture, have preyed on adult black vultures. 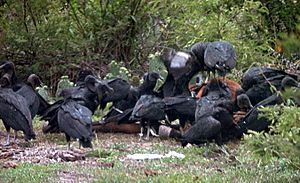 A flock on a horse carcass 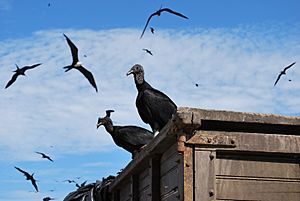 Waiting to scavenge fish from the morning catch in Puerto López

The black vulture is considered a threat by cattle ranchers due to its predation on newborn cattle. The droppings produced by black vultures and other vultures can harm or kill trees and other vegetation. The bird is also considered a threat to the safety of aerial traffic, especially when it congregates in large numbers in the vicinity of garbage dumps—as is the case in the Rio de Janeiro Tom Jobim International Airport.

The black vulture can be held in captivity, though the Migratory Bird Treaty Act only allows this in the case of animals which are injured or unable to return to the wild. It receives special legal protections under the Migratory Bird Treaty Act of 1918 in the United States, by the Convention for the Protection of Migratory Birds in Canada, and by the Convention for the Protection of Migratory Birds and Game Mammals in Mexico. In the United States it is illegal to take, kill, or possess black vultures and violation of the law is punishable by a fine of up to US$15,000 and imprisonment of up to six months. It is listed as a species of Least Concern by the IUCN Red List. Populations appear to remain stable, and it has not reached the threshold of inclusion as a threatened species, which requires a decline of more than 30% in ten years or three generations.

The black vulture appears in a variety of Maya hieroglyphics in Mayan codices. It is normally connected with either death or as a bird of prey. The vulture's glyph is often shown attacking humans. This species lacks the religious connections that the king vulture has. While some of the glyphs clearly show the black vulture's open nostril and hooked beak, some are assumed to be this species because they are vulture-like but lack the king vulture's knob and are painted black. This vulture has appeared on two stamps: those of Guyana in 1990 and Nicaragua in 1994.

All content from Kiddle encyclopedia articles (including the article images and facts) can be freely used under Attribution-ShareAlike license, unless stated otherwise. Cite this article:
Black vulture Facts for Kids. Kiddle Encyclopedia.