The cinereous vulture (Aegypius monachus) is a large raptorial bird that is distributed through much of Eurasia. It is also known as the black vulture, monk vulture, or Eurasian black vulture. It is a member of the family Accipitridae, which also includes many other diurnal raptors such as kites, buzzards and harriers. It is one of the two largest Old World vultures, attaining a maximum size of 14 kg, 1.2 m long and 3.1 m across the wings. 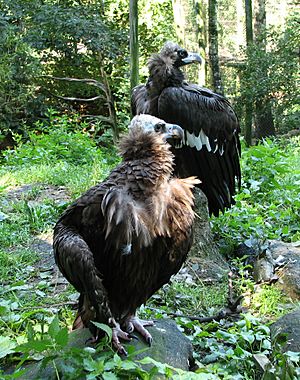 A pair in captivity

The cinereous vulture is believed to be the largest true bird of prey in the world. The condors, which may be marginally larger, are now generally considered unrelated to the true raptors.

The cinereous vulture is distinctly dark, with the whole body being brown excepting the pale head in adults, which is covered in fine blackish down. The skin of the head and neck is bluish-gray and a paler whitish color above the eye. The adult has brown eyes, a purplish cere, a blue-gray bill and pale blue-gray legs. The wings, with serrated leading edges, are held straight or slightly arched in flight and are broad, sometimes referred to as "barn door wings". Their flight is slow and buoyant, with deep, heavy flaps when necessary. 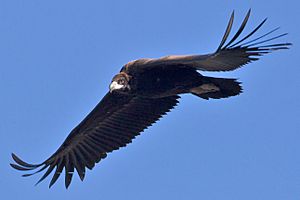 The cinereous vulture is a largely solitary bird, being found alone or in pairs much more frequently than most other Old World vultures. At large carcasses or feeding sites, small groups may congregate. Such groups can rarely include up to 12 to 20 vultures, with some older reports of up to 30 or 40. 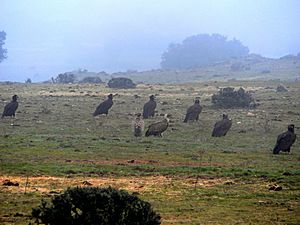 Among the vultures in its range, the cinereous is best equipped to tear open tough carcass skins thanks to its powerful bill. It can even break apart bones, such as ribs, to access the flesh of large animals. It is dominant over other scavengers in its range, even over other large vultures.

The cinereous vulture has declined over most of its range in the last 200 years in part due to poisoning by eating poisoned bait put out to kill dogs and other predators, and to higher hygiene standards reducing the amount of available carrion; it is currently listed as Near Threatened.

All content from Kiddle encyclopedia articles (including the article images and facts) can be freely used under Attribution-ShareAlike license, unless stated otherwise. Cite this article:
Cinereous vulture Facts for Kids. Kiddle Encyclopedia.