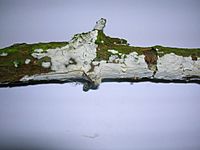 The white on this branch of Elderberry is a fungus called Elder Whitewash (Hyphodontia sambuci). It is little researched, and might be put incertae sedis in the basidiomycetes.

In taxonomy, the term incertae sedis (abbreviated inc. sed.) is used for a taxon when its broader relationship to other taxa is unknown. The first person who used the term in botany was probably Antoine-Laurent de Jussieu. In his book Genera Plantarum of 1789 he listed a few plantae incertae sedis.

Reasons why a taxon might be classified as incertae sedis include:

All content from Kiddle encyclopedia articles (including the article images and facts) can be freely used under Attribution-ShareAlike license, unless stated otherwise. Cite this article:
Incertae sedis Facts for Kids. Kiddle Encyclopedia.