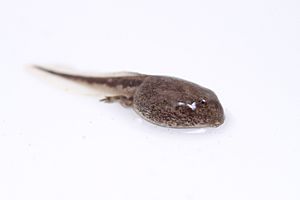 The eggs of the American toad are laid in two strings and can hatch in 2–14 days. When hatched the tadpoles are recognizable by their skinny tails in relation to the size of their black bodies. They advance to adulthood in 50–65 days.

When metamorphosis is completed, the "toadlets" may stay in the water for a short period of time before they become mostly land based. Often entire groups of tadpoles reach the toadlet stage at once and a mass migration to higher ground takes place usually to shaded areas of mid range and upland forests bordering the marshes from where they were bred. 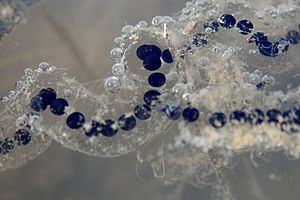 Toadlets can be observed eating microscopic bugs as fast as they can in the ground area they roam between various vegetation; they are also known to eat ants, spiders, slugs and worms.

Tadpoles have several mechanisms to reduce predation. They avoid predators by swimming in very shallow water often with thick grass vegetation, and by swimming close together in schools during the day.

Tadpoles also produce toxic chemicals in their skin that discourage some potential predators. Fish have been reported to die after consuming one tadpole; however, most fish quickly learn to avoid eating American toad tadpoles. The tadpoles are also very small and they are a solid black color. 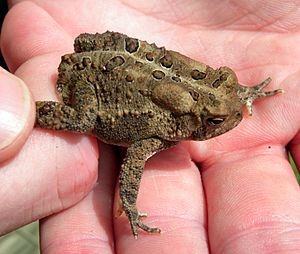 The eastern American toad is a medium-sized toad usually ranging in size from 5–9 cm (2.0–3.5 in); record 11.1 centimetres (4.4 in). The color and pattern is somewhat variable, especially for the females. Skin color can change depending on habitat colors, humidity, stress, and temperature. Color changes range from yellow to brown to black, from solid colors to speckled.

The call or voice of a breeding male is a high trill, lasting 6–30 seconds, similar to a ringing telephone.

The toad can secrete a poisonous substance to make taste bad to potential predators. Bufotoxin is a mild poison in comparison to that of other poisonous toads and frogs, but it can irritate human skin and is dangerous to smaller animals (such as dogs) when ingested. 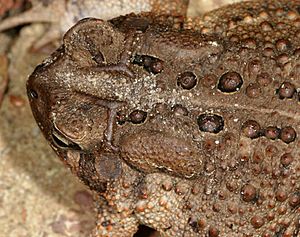 American toads require a semi-permanent freshwater pond or pool with shallow water in which to breed, they also require dense patches of vegetation, for cover and hunting grounds. Given these two things and a supply of insects for food, American toads can live almost everywhere, ranging from forests to flat grassland.

Some of these toads have been known to live over 30 years and currently a female specimen (over 13 centimeters long) is living healthily into her late 30s. When cold weather comes, these toads dig backwards and bury themselves in the dirt to hibernate. 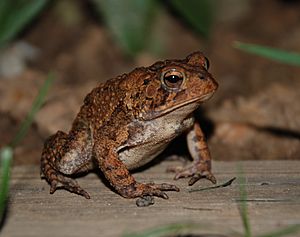 The dwarf American toad (B. a. charlesmithi), is a smaller version of the American toad which reaches lengths of about 6 cm (2 1⁄4 in) and is generally a dark reddish color ranging to light red in some specimens in isolated populations.

Some specimens have a white dorsal line in the middle of their backs. It eats mainly spiders, worms and small insects. 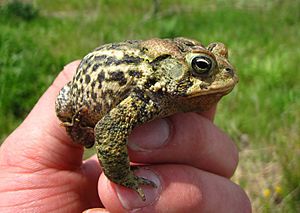 The Hudson Bay toad (A. a. copei) is a rare Canadian subspecies of A. americanus. This subspecies of the American toad has been seen in the northern parts of Ontario where there are a few isolated populations.

These northern dwarf toads mostly have the red coloring on the sides of their bodies and have an unusually high number of warts for the subspecies.

Interbreeding with eastern American toads caused this subspecies to lose the red coloring on their backs.

All content from Kiddle encyclopedia articles (including the article images and facts) can be freely used under Attribution-ShareAlike license, unless stated otherwise. Cite this article:
American toad Facts for Kids. Kiddle Encyclopedia.