Pantherophis obsoletus – also known as the western rat snake, black rat snake, pilot black snake, or simply black snake – is a non-venomous species of Colubridae found in central North America. No subspecies are currently recognized. Its color variations include the Texas ratsnake. Not to be confused with the Eastern indigo snake (Drymarchon couperi) or the Eastern racer (Coluber constrictor), which are other North American snake species commonly called 'black snakes.'

Pantherophis obsoletus is found west of the Mississippi River, from eastern and southern Iowa southward through Missouri and Arkansas to western Louisiana, westward to eastern Texas, northward through Oklahoma and eastern Kansas to southeastern Nebraska.

Aside from the usual variety that is black or has patches of black on a lighter background, color variations include

the Texas rat snake, a brown-to-black variant, often with tinges of orange or red, that can be found in southern Oklahoma, Texas, and Louisiana.

Rat snakes live in a variety of habitats; some overlap each other. Rat snakes are excellent climbers and spend time in trees. They live in habitats ranging from a rocky hillside to flat farmland.

It prefers heavily wooded areas and is known for having excellent climbing ability, including the ability to climb the trunk of large mature trees without the aid of branches; the snake is also a competent swimmer. During winter it hibernates in dens, often with copperheads and timber rattlesnakes. This association gave rise to one of its common names, pilot black snake, and the superstition that this nonvenomous species led the venomous ones to the den. 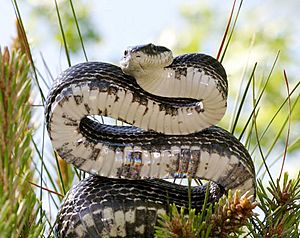 Adults of Pantherophis obsoletus can become quite large, with a reported typical total length (including tail) of 106.5–183 cm (3 ft 6 in–6 ft 0 in). They are the largest snake found in Canada. The record total length is 256.5 cm (8 ft 5 in), making it (officially) the longest snake in North America. Unofficially, indigo snakes (Drymarchon couperi) are known to exceed them, and one wild-caught pine snake (Pituophis melanoleucus), with a portion of its tail missing, measured 111 inches (2.8 m). The body mass of this rat snake can range up to 0.5 to 2.2 kg (1.1 to 4.9 lb) in adults, although most adults are on the smaller end of this scale, per herpetology research sites, with weights most commonly between 0.77 and 1 kg (1.7 and 2.2 lb).

Juveniles are strongly patterned with brown blotches on a gray background (like miniature fox snakes: P. gloydi, P. ramspotti, and P. vulpinus). Darkening occurs rapidly as they grow. Adults are glossy black above with white lips, chin, and throat. Sometimes traces of the "obsolete" juvenile pattern are still discernible in the skin between the scales, especially when stretched after a heavy meal. 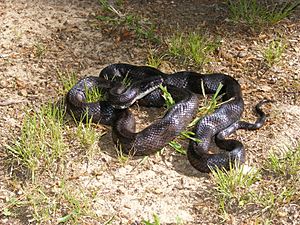 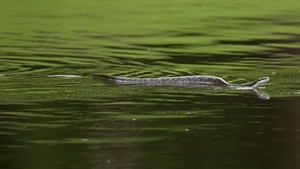 When not fully grown, rat snakes are subject to predation by many animals, including other snakes. Once they attain maturity, they are readily preyed on by mammalian carnivores (including the American mink, which weighs no more than an adult rat snake) and large birds of prey (especially red-tailed hawks). When startled, they may freeze and wrinkle themselves into a series of kinks. If they feel further threatened, they may flee quickly or tail vibrate (potentially a form of mimicry, which makes them sound like rattlesnakes). They are also capable of producing a foul-smelling musk, which they will release onto predators if picked up. They spread the musk with their tails in hopes of deterring the threat. When cornered or provoked, black snakes are known to stand their ground and can become aggressive. Counterattacks on large birds of prey, often committed by large snakes in excess of 150 cm (59 in) in length, have resulted in violent prolonged struggles. Utilizing its infamous agility and the great strength of its muscular coils, the black rat snake is sometimes able to overwhelm and kill formidable avian predators such as red-tailed hawks, great horned owls and red-shouldered hawks, though in many cases the bird is able to kill the snake and both combatants may even die. 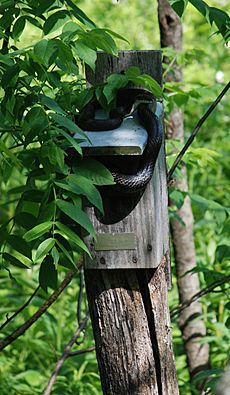 This species is a constrictor, meaning it squeezes its prey to the point of cardiovascular collapse due to obstructive shock, coiling around small animals and tightening its grip until they can no longer circulate blood and die of profound hypotension, before eating them. Though they will often consume mice, voles, and rats, western rat snakes are far from specialists at this kind of prey and will readily consume any small vertebrate they can catch. Other prey opportunistically eaten by this species can include other snakes (including both those of their own and other species), frogs, lizards, chipmunks, squirrels, juvenile rabbits, juvenile opossums, songbirds, and bird eggs. One snake was observed to consume an entire clutch of Mallard eggs. Cavity-nesting bird species are seemingly especially prevalent in this snake's diet. The rat snake has been noted as perhaps the top predator at purple martin colonies as a single large snake will readily consume a number of eggs, hatchlings, and adults each summer. Several rat snake repelling methods have been offered to those putting up martin houses, but most are mixed in success. 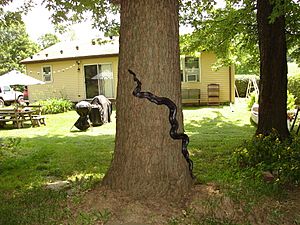 Mating while climbing a tree

This species has previously been placed (and is still placed by many) in the genus Elaphe, as Elaphe obsoleta. However, Utiger et al. found that Elaphe is broadly construed as paraphyletic, and placed this species in the genus Pantherophis. In addition, because Pantherophis is masculine, the specific epithet becomes the masculine obsoletus. The split of Pantherophis from Elaphe has been further confirmed by additional phylogenetic studies.

In 2008, Collins and Taggart resurrected the genus Scotophis for Burbrink's three taxa (i.e., Scotophis alleghaniensis, Scotophis spiloides, and Scotophis obsoletus) in response to the findings of Burbrink and Lawson, 2007. The justification for this nomenclatural change has been removed by more recent research.

Western rat snakes are popular as pets. Their size, calm temperament, and ease of care contribute to this popularity and they also occur in many mutations such as leucistic, albino, and scaleless. They enjoy hiding and burrowing which is usually accommodated with a loose substrate (such as aspen wood shavings or newspaper) and one or more hide boxes. Captive rat snakes are generally fed killed or stunned mice because captive-bred mice reduce the risk of exposing the snake to pathogens or live prey-induced injuries.

All content from Kiddle encyclopedia articles (including the article images and facts) can be freely used under Attribution-ShareAlike license, unless stated otherwise. Cite this article:
Pantherophis obsoletus Facts for Kids. Kiddle Encyclopedia.