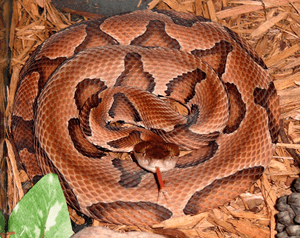 Adult specimens have a coppery colored head and neck. They are not large snakes, generally about 50 cm long (1.5 ft), but specimens up to 1 m long (3 ft) have been encountered. The body is thin by pit viper standards. The head is broad and distinct from the neck.

Within its range it occupies a variety of different habitats. In most of North America it favors deciduous forest and mixed woodlands. It is often associated with rock outcroppings and ledges, but is also found in low-lying swampy regions. During the winter it hibernates in dens, in limestone crevices, often together with timber rattlesnakes and black rat snakes. In the states around the Gulf of Mexico, however, this species is also found in coniferous forest. In the Chihuahuan Desert of west Texas and northern Mexico, it occurs in riparian habitats, usually near permanent or semipermanent water and sometimes in dry arroyos (brooks).

This species is classified as Least Concern (LC) on the IUCN Red List of Threatened Species. Species are listed as such due to their wide distribution, presumed large population, or because it is unlikely to be declining fast enough to qualify for listing in a more threatened category. The population trend was stable when assessed in 2015. 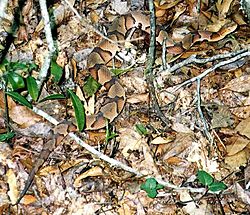 Southern copperhead, A. c. contortrix, at the southern limit of its range, in Liberty Co., Florida, camouflaged in dead leaves

Like all pit vipers, A. contortrix is generally an ambush predator: it takes up a promising position and waits for suitable prey to arrive. One exception to ambush foraging occurs when copperheads feed on insects such as caterpillars and freshly molted cicadas. When hunting insects, copperheads actively pursue their prey. Juveniles use a brightly colored tail to attract frogs and perhaps lizards. In the Southern United States, they are nocturnal during the hot summer months, but are commonly active during the day during the spring and fall.

Like most North American viperids, these snakes prefer to avoid humans and, given the opportunity, will leave the area without biting. However, unlike other viperids they will often "freeze" instead of slithering away, and as a result, many bites occur from people unknowingly stepping on or near them. This tendency to freeze most likely evolved because of the extreme effectiveness of their camouflage. When lying on dead leaves or red clay, they can be almost impossible to notice. They will frequently stay still even when approached closely, and will generally strike only if physical contact is made. Like most other New World vipers, copperheads exhibit defensive tail vibration behavior when closely approached. This species is capable of vibrating its tail in excess of 40 times per second— faster than almost any other non-rattlesnake snake species. Copperheads may release a cucumber-smelling musk if touched.

Roughly 90% of its diet consists of small rodents, such as mice and voles. They have also shown fondness for large insects and frogs, and though highly terrestrial, have been known to climb trees to gorge on emerging cicadas.

A. contortrix breeds in late summer, but not every year: sometimes a female will produce young for several years running, then not breed at all for a time. They give birth to live young, each of which is about 20 cm (7.9 in) in total length. The typical litter size is 4 to 7, but there can be as few as one, or as many as 20. Their size apart, the young are similar to the adults, but lighter in color, and with a yellowgreen-marked tip to the tail, which is used to lure lizards and frogs.

A study has shown that A. contortrix males have longer tongue tine lengths than females during the breeding season which may aid in chemoreception of males searching for females.

Copperheads are venomous, but almost never deadly to humans and are generally non-aggressive. They have an efficient venom delivery system, with long fangs mounted at the front of the jaw which swivel back to allow the snake to close its mouth. The genus name Agkistrodon is derived from the Greek agkistron (fish-hook) and odon (tooth); a reference to the curved fangs. The primary role of the venom and fangs is to kill their food items quickly; the amount of venom a single copperhead can deliver is insufficient to kill an otherwise healthy adult human. It capable of, however, producing intense pain, tingling, throbbing, swelling, and severe nausea. While rarely lethal, a copperhead bite can be damaging to muscle and bone tissue, especially when the bite occurs in the outer extremities such as the hands and feet, areas in which there is not a large muscle mass to absorb the venom. A bite from any venomous snake should be taken very seriously and immediate medical attention sought.

Copperheads often employ a "warning bite" when stepped on or agitated and inject a relatively small amount of venom, if any at all. "Dry bites" involving no venom are particularly common with the copperhead, though all pit vipers are capable of a dry bite.

In the state of Missouri about 200 people suffer from snakebite each year, mostly from copperheads, but there are no records of deaths resulting. Although, technically the antivenom CroFab could be used to treat an envenomation from a copperhead, it is not typically administered as the risk of complications through an allergic reaction to the treatment is greater than the risk from the snakebite itself. Pain management, antibiotics, and medical supervision in the case of complications is typically the course of action.

The venom of the southern copperhead has been found to hold a protein called "contortrostatin" that halts the growth of cancer cells in mice and also stops the migration of the tumors to other sites. However, this is an animal model, and further testing is required to verify safety and efficacy in humans. 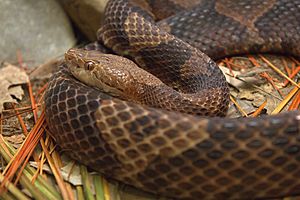 Commonly, the average person will assume any reddish or brownish snake is a copperhead. This is far from the case. Many harmless snakes, such as the brown snake (genus Storeria), or water snake (genus Nerodia) are frequently mistaken for copperheads. Copperheads are primarily a terrestrial species, and though quite capable swimmers, they are rarely found swimming.

The best way to avoid being bitten when in the outdoors in copperhead country is to be aware of their typical behavior and habitats and take appropriate precautions. Like most North American vipers, copperheads prefer to avoid humans and, given the opportunity, will leave the area without biting; however, unlike the rattlesnake, they are unable to make an audible warning of their presence.

Copperheads often tend to "freeze" instead of slithering away; thus, many bites come from people unknowingly stepping on or near them. This tendancy to freeze likely evolved because of the extreme effectiveness of their camouflage. When laying on dead leaves or red clay they can be almost impossible to notice. They will frequently stay still even when approached closely, and will only generally strike if physically harassed or trod upon.

Small hiding places such as niches in rock walls, woodpiles, etc., should be examined before hands or feet are placed in them, and one should stand on or bend over a fallen log to look for a snake instead of blindly jumping over. Favorite habitats include rocky hillsides above wooded streams. In the south, copperheads are nocturnal during the hot summer months, but are commonly active during the day during the spring and fall. A pair of stout leather hiking boots might blunt the strike of a snake. Heavy tramping of feet will cause vibrations in the ground that can alert snakes to peoples' presence, giving them time to quietly escape. The majority of snakebite incidents are the result of attempting to handle the snake or attacking it with an object.

If bitten, one should not apply a tourniquet or suck blood from the bite — the victim should be kept calm and be transported to a hospital as quickly as possible. A tourniquet will increase tissue damage in the area of the bite and may even create the need to amputate a bitten limb that may have otherwise been saved. Never cut where the bite is.

All content from Kiddle encyclopedia articles (including the article images and facts) can be freely used under Attribution-ShareAlike license, unless stated otherwise. Cite this article:
Agkistrodon contortrix Facts for Kids. Kiddle Encyclopedia.