Presidio County is a county located in the U.S. state of Texas. As of the 2020 census, its population was 6,131. Its county seat is Marfa. The county was created in 1850 and later organized in 1875. Presidio County (K-5 in Texas topological index of counties) is in the Trans-Pecos region of West Texas and is named for the border settlement of Presidio del Norte. It is on the Rio Grande, which forms the Mexican border.

Paleo-Indians Hunter-gatherers existed thousands of years ago on the Trans-Pecos, and often did not adapt to culture clashes, European diseases and colonization. The Masames tribe was exterminated by the Tobosos, circa 1652. The Nonojes suffered from clashes with the Spanish and merged with the Tobosos. The Spanish made slave raids to the La Junta de los Ríos, committing cruelties against the native population. The Suma-Jumano tribe sought to align themselves with the Spanish for survival. The tribe later merged with the Apache people. Foraging peoples who did not survive the 18th Century include the Chisos, Mansos, Jumanos, Conchos, Julimes, Cibolos, Tobosos, Sumas, Cholomes, Caguates, Nonojes, Cocoyames, and Acoclames.

The entrada of Juan Domínguez de Mendoza and Father Nicolás López in 1683–84 set out from El Paso to La Junta where they established seven missions at seven pueblos. In 1683 Father López celebrated the first Christmas Mass ever observed in Texas at La Junta.

In 1832, José Ygnacio Ronquillo was issued a conditional land grant, and established the county’s first white settlement on Cibolo Creek. Military obligations forced him to abandon the settlement, and then sold the land.

The Chihuahua Trail connecting Mexico’s state of Chihuahua with Santa Fe, New Mexico opened up in 1839.

By 1848 Ben Leaton built Fort Leaton, sometimes called the largest adobe structure in Texas, on the river as his home, trading post, and private bastion. Leaton died in debt in 1851, with the fort passing to the holder of the mortgage, John Burgess. In 1934 T. C. Mitchell and the Marfa State Bank acquired the old structure and donated it to the county as a historic site. The park was opened to the public in 1978.

Milton Faver became the county’s first cattle baron. In 1857, he moved his family to Chinati Mountains in the county. Faver bought small tracts of land around three springs-Cibolo, Cienega, and La Morita and established cattle ranches. He built Fort Cienega and Fort Cibolo.

In 1854 the army built Fort Davis in northern Presidio County. Fort Davis closed during the Civil War and reopened in 1867. The black population increased to 489 when Buffalo Soldiers were stationed at Fort Davis.

John W. Spencer, a local rancher and trader, found a silver deposit in the Chinati Mountains in 1880 that resulted in the opening of Presidio Mine and the beginning of the company town of Shafter. From 1883 until 1942 the mine produced over 32.6 million ounces of silver.

The railroad reached Presidio County in 1882 when the Galveston, Harrisburg and San Antonio Railway laid tracks through its northeastern corner. 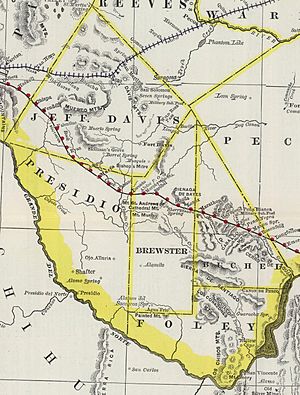 Map of Presidio County, Texas and the counties of Brewster, Buchel, Foley, and Jeff Davis created from Presidio in 1887. Buchel and Foley were abolished and joined to Brewster in 1897.

W. F. Mitchell built the first barbed wire fence in the county at Antelope Springs in 1888. The widespread use of barbed wire resulted in the refinement of cattle breeds, improvement of ranges, and innovative use of water supplies.

Windmills, water wells, and earthen tanks were introduced on Presidio County ranches in the late 1880s.

Elephant Butte Dam was built in 1910 on the Rio Grande, creating a large reliable irrigation source for the county.

The growth of Presidio County's population in the 1910s reflected the impact of the Mexican Revolution on border life. Refugees migrated to the county from Chihuahua as the fighting moved into northern Mexico. The United States Army established several posts in the county. Marfa became the headquarters for the Big Bend Military District, and in 1917 the Army established Camp Marfa, later called Fort D. A. Russell, at Marfa to protect the border. As Presidio County entered the 1930s the people faced a drought and a population decline. Low silver prices closed Presidio Mine at Shafter. Economic recovery began by 1936. During World War II Presidio County enjoyed economic prosperity as the home for two military installations-Fort Russell and Marfa Army Airfield.

In late January 1918, during a period of tension between the US and Mexico, Texas Rangers and citizens of the village of Porvenir murdered fifteen local Hispanic residents.

The economy of the county in 1982 was based primarily on agriculture with 83 percent of the land in farms and ranches.

Wagon trains on the Chihuahua Trail reported seeing unexplained lights in the mid 19th Century. The first recorded incident of the Marfa Lights was in 1883 when Robert Reed Ellison and cowhands camped at Mitchell Flats. They thought the lights might have been Apaches, but later found no evidence of an Apache encampment. Since that time, the lights continue to appear between Marfa and Paisano Pass. Speculation and fascination spark imaginations about the source. Some say they are caused by car headlights, some say extraterrestrial visitors. One theory is that the lights are similar to a mirage caused by atmospheric conditions. No one really knows for sure. Marfa celebrates with a Mystery Lights Festival every Labor Day.

Presidio County is triangular in shape and is bounded on the east by Brewster County, on the north by Jeff Davis County, and on the south and west for 135 miles (217 km) by the Rio Grande and Mexico. Marfa, the county seat, is 190 miles (306 km) southeast of El Paso and 150 miles (241 km) southwest of Odessa. The center of the county lies at 30°30' north latitude and 104°15' west longitude.

Geographically, Presidio County comprises 3,857 square miles (9,990 km2) of contrasting topography, geology, and vegetation. In the north and west, clay and sandy loam cover the rolling plains known as the Marfa Plateau and the Highland Country, providing good ranges of grama grasses for the widely acclaimed Highland Herefords. In the central, far western, and southeastern areas of the county some of the highest mountain ranges in Texas are found. These peaks are formed of volcanic rock and covered with loose surface rubble. They support desert shrubs and cacti and dominate a landscape of rugged canyons and numerous springs. The spring-fed Capote Falls, with a drop of 175 feet (53 m), the highest in Texas, is located in western Presidio County. In the southern and western parts of the county, the volcanic cliffs of the Candelaria Rimrock (also called the Sierra Vieja) rise perpendicular and run parallel to the river, separating the highland prairies from the desert floor hundreds of feet below them. The gravel pediment, which allows only the growth of desert shrubs and cacti, extends from the Rimrock to the flood plain of the river. Along the river, irrigation allows the farming of vegetables, grains, and cotton. There are no permanent streams in the county, although many arroyos become raging torrents during heavy rainfalls. Major ones are Alamito Creek, Cibolo Creek, Capote Creek, and Pinto Canyon. San Esteban Dam was built across Alamito Creek and on the site of a historic spring-fed tinaja in 1911 as an irrigation and land promotion project. Altitudes in the county vary from 2,518 to 7,728 feet (767 to 2,355 m) above sea level. Temperatures, moderated by the mountains, vary from 33 °F (1 °C) in January to 100 °F (38 °C) in July. Average rainfall is 12 inches (300 mm) per year, mainly in June, July, and August. The growing season extends for 238 days. Natural resources under production in 1982 were perlite, crushed rhyolite, sand, and gravel. Silver mining contributed greatly to the economy of the county from the 1880s to the 1940s. Presidio County has no oil or gas production.

Presidio County's unusual shape has it facing more of Mexico than the rest of the United States. The county is bounded on the east by Brewster County, on the north by Jeff Davis County, and on the south and west for 135 miles (217 km) by the Rio Grande and Mexico. Along the international border, the county faces the Manuel Benavides and Ojinaga Districts of the state of Chihuahua, Mexico, on the south side, and the municipality of Guadalupe of the State of Chihuahua, Mexico, on its southwestern side.

More than half of Presidio County, 54.6%, experiences a hot arid desert climate (Köppen BWh). The remainder has a semi-arid steppe climate with 34.7% classified as a cold steppe climate (Köppen BSk) and 10.8% as a hot steppe climate (Köppen BSh). Temperatures are coolest and rainfall most abundant in the higher elevations of the Davis and Chinati mountains. By contrast, the lowlands along the Rio Grande along the southern and western areas of the county are dry with often extreme summer daytime heat and where winter snowfall is unusual. Throughout the county, May through October marks the rainy season while the remainder of the year is predominantly dry.

Miller Ranch is located in the far north of the county ten miles from Valentine in adjoining Jeff Davis County.

The Riata house and exteriors for Giant, released 1956, were filmed at Marfa. The big stars, Elizabeth Taylor, Rock Hudson, James Dean, and others stayed at the Hotel Paisano for two months.

Presidio County is within the Odessa College District for community college.

All content from Kiddle encyclopedia articles (including the article images and facts) can be freely used under Attribution-ShareAlike license, unless stated otherwise. Cite this article:
Presidio County, Texas Facts for Kids. Kiddle Encyclopedia.