Marfa is a city in the high desert of the Trans-Pecos in far West Texas, located between the Davis Mountains and Big Bend National Park. It is the county seat of Presidio County, and its population as of the 2010 United States Census was 1,981. The city was founded in the early 1880s as a waterstop; the population increased during World War II, but the growth stalled and reversed somewhat during the late 20th century. Today, Marfa is a tourist destination and a major center for Minimalist art. Attractions include Building 98, the Chinati Foundation, artisan shops, historical architecture, a classic Texas town square, modern art installments, art galleries, and the Marfa lights.

Marfa was founded in the early 1880s as a railroad water stop. The town was named "Marfa" at the suggestion of the wife of a railroad executive. Although some historians have hypothesized that the name came from a character in Fyodor Dostoevsky novel The Brothers Karamazov, Marfa was actually named after Marfa Strogoff, a character in the Jules Verne novel Michael Strogoff. The town grew quickly during the 1920s.

The Marfa Army Airfield served as a training facility for several thousand pilots during World War II, including the American actor Robert Sterling, before closing in 1945. The base was also used as the training ground for many of the United States Army's chemical mortar battalions. 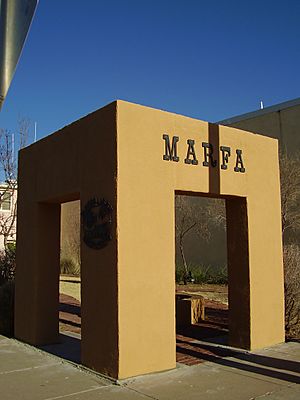 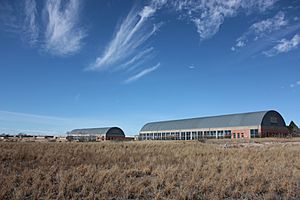 The area around Marfa is known as a cultural center for contemporary artists and artisans. In 1971, minimalist artist Donald Judd moved to Marfa from New York City. After renting summer houses for a couple of years, he bought two large hangars and some smaller buildings and began to permanently install his art. While this started with his building in New York, the buildings in Marfa allowed him to install his works on a larger scale. In 1976, he bought the first of two ranches that would become his primary places of residence, continuing a long love affair with the desert landscape surrounding Marfa. Later, with assistance from the Dia Art Foundation in New York, Judd acquired decommissioned Fort D.A. Russell, and began transforming the fort's buildings into art spaces in 1979. Judd's vision was to house large collections of individual artists' work on permanent display, as a sort of anti-museum. Judd believed the prevailing model of a museum, where art is shown for short periods of time, does not allow the viewer an understanding of the artist or their work as they intended.

In recent years, a new wave of artists has moved to Marfa to live and work. As a result, new gallery spaces have opened in the downtown area. The Crowley Fountation theater and its theater annex host public events with seating for over 175 as a public service to nonprofit foundations. Furthermore, The Lannan Foundation has established a writers-in-residency program, a Marfa theater group has formed, and a multifunctional art space called Ballroom Marfa has begun to show art films, host musical performances, and exhibit other art installations. The city is also 37 miles (60 km) from Prada Marfa, a pop art exhibit, and is home to Cobra Rock Boot Company and The Wrong Store.

Building 98, also located in Marfa, is a project of the International Woman's Foundation, which has operated an artist-in-residency program since 2002. The International Woman's Foundation was responsible for placing Fort D.A. Russell on the National Register of Historic Places as an effort to preserve the historic importance of the site. The facility's studio galleries host artists who desire to exhibit work in the region at a premier venue. In late September 2012 through early April 2013, the foundation held a major retrospective of the works of Wilhelmina Weber Furlong at Building 98 featuring over 75 unseen works of the early American woman modernist. Building 98 is located at historic Fort D. A. Russell; it is the home of Marfa's German POW murals. The facility also features the George Sugarman sculpture courtyard. 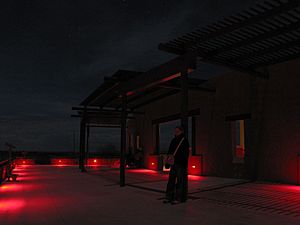 Apart from Donald Judd and modern art, Marfa may be most famous for the Marfa lights, visible on clear nights between Marfa and the Paisano Pass when one is facing southwest (toward the Chinati Mountains). According to the Handbook of Texas Online, "... at times they appear colored as they twinkle in the distance. They move about, split apart, melt together, disappear, and reappear. Presidio County residents have watched the lights for over a hundred years. The first historical record of them dates to 1883. Presidio County has built a viewing station nine miles east of town on US 67 near the site of the old air base. Each year, enthusiasts gather for the annual Marfa Lights Festival. The lights have been featured and mentioned in various media, including the television show Unsolved Mysteries and an episode of King of the Hill ("Of Mice and Little Green Men") and in an episode of Disney Channel Original Series So Weird. A book by David Morrell, 2009's The Shimmer, was inspired by the lights. The Rolling Stones mention the "lights of Marfa" in the song "No Spare Parts" from the 2011 re-release of their 1978 album Some Girls.

In August 2006, two movie production units filmed in Marfa: There Will Be Blood, an adaptation of the Upton Sinclair novel Oil! directed by Paul Thomas Anderson, and the Coen Brothers' adaptation of the Cormac McCarthy novel No Country for Old Men.

Larry Clark's 2012 film Marfa Girl was filmed exclusively in Marfa. Also, Far Marfa, written and directed by Cory Van Dyke, made its debut in 2012. Additionally, various musical artists have filmed music videos in the town, including Edward Sharpe and the Magnetic Zeros, The xx, Between the Buried and Me, and Diamond Rings. In 2008, Marfa held the first annual Marfa Film Festival, which lasted from May 1–5.

The Amazon show I Love Dick takes place in Marfa.

Marfa experiences a semiarid climate with hot summers and cool winters. Due to its altitude and aridity, the diurnal temperature variation is substantial.

All content from Kiddle encyclopedia articles (including the article images and facts) can be freely used under Attribution-ShareAlike license, unless stated otherwise. Cite this article:
Marfa, Texas Facts for Kids. Kiddle Encyclopedia.