Alpine is a city in and the county seat of Brewster County, Texas, United States. The population was 5,905 at the 2010 census. The town has an elevation of 4,475 feet, and the surrounding mountain peaks are over a mile high. The university, hospital, library, and retail make Alpine the center of the sprawling (12,000 square miles) but wide open Big Bend area (combined population only 12,500) including Brewster, Presidio, and Jeff Davis counties. 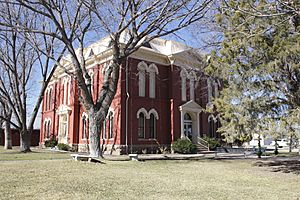 The area had been a campsite for cattlemen tending their herds between 1878 and the spring of 1882, when a town of tents was created by railroad workers and their families. Because the section of the railroad was called Osborne, that was the name of the small community for a brief time. The railroad needed access to water from springs owned by brothers named Daniel and Thomas Murphy, so it entered into an agreement with the Murphys to change the name of the section and settlement to Murphyville in exchange for a contract to use the spring. In November 1883 the Murphys registered a plat for the town of Murphyville with the county clerk of Presidio County.

The town's name was changed to Alpine on February 3, 1888, following a petition by its residents. At this time a description of the town mentioned a dozen houses, three saloons, a hotel and rooming house, a livery stable, a butcher shop, and a drugstore, which also housed the post office.

The town was always small enough that no one insisted on tearing down old buildings to make parking lots, and it is still too small to interest big box store chains. The Holland Hotel, built during a brief mercury mining boom, was designed by Henry Trost, a distinguished regional architect. Today it helps to anchor a traditional downtown of early 20th-Century buildings still occupied by family-owned retailers and restaurants.

The town sits on a high plateau, in the Chihuahua Desert, with the Davis Mountains to the north and the Chisos Mountains to the south. Outcrops of ancient volcanic rocks spread to the northwest. Other layers of rocks have been exposed over time as the mountains were forced up and then eroded. The high elevation cools the desert air in the evenings.

According to the United States Census Bureau, the city has a total area of 4.7 square miles (12.1 km2), all land.

In the winters, ample sunshine usually warms the days, though the nights can be chilly due to the 4,475 feet or 1,360 metres elevation. In the summer, the fierce sun causes hot days, pleasantly relieved in the evening by the same high elevation. According to the Köppen Climate Classification system, Alpine has a semi-arid climate, abbreviated BSk on climate maps.

There were 2,429 households out of which 28.7% had children under the age of 18 living with them, 43.7% were married couples living together, 11.8% had a female householder with no husband present, and 40.9% were non-families. 34.3% of all households were made up of individuals and 13.1% had someone living alone who was 65 years of age or older. The average household size was 2.34 and the average family size was 3.04.

The Museum of the Big Bend on the Sul Ross campus uses world-class exhibits of Native American artifacts, cultural history, geology, paleontology, and Western art to introduce the visitor to the Big Bend region. Subjects include the area's Indian tribes, the Buffalo soldiers, the mining era, the stagecoach, the railroad, and the history of Big bend National Park. The overview includes historic photographs and short videos. The handsome building was constructed in 1937 with local stone. Funding came from the Texas Centennial Commission and the Works Progress Administration, a federal make-work program during the Depression. Open Tuesday-Sunday, free admission.

The Alpine Public Library opened a large and modern facility in February, 2011, offering computer use with free Wi-Fi and access to online data, as well as traditional books, magazines and other periodicals, CDs and DVDs. Located at 805 W. Avenue E, it has a community meeting room, and is open Mon-Fri 9:30 a.m.-6 p.m., and Saturday 10-3 p.m.

Begun by volunteers in 1947, the Alpine Public Library remains an independent entity with its own Board of Directors, though it is well-supported by the taxpayers of Brewster County and the City of Alpine. The community institution has a professional staff of nine, but much of the work is still done by volunteers. Special programs, like a Science Club and Computer Learning, are aimed at users from pre-schoolers and teens to parents and retirees.

The Brewster County Courthouse and Jail. Built in 1887-1888 by Tom Lovett, a local contractor, who apparently designed the buildings as well (documentation is scarce).

Open to visitors, with historic photographs displayed in the great hall.

The red brick courthouse is a fine vernacular example of the American Second Empire Style. The rectangular mass has five bays of paired round arch window openings on the longer north and south facades. The shorter east and west facades have three bays. On three facades the center bay contains a doorway at ground level, set in a thin, barely protruding pavilion. The second story windows are slightly taller than the first floor openings, a trick of the eye making the two-and-a-half story building seem even taller. The walls are topped by a pressed tin entablature composed of a frieze and cornice. The Mansard roof is marked by steeply hipped pyramidal towers with pressed tin cresting. The interior retains exemplary pressed tin ceilings and some original woodwork. A wooden staircase with Eastlake type details rises to the General Courtroom on the second floor.

Located on the Courthouse Square between Avenue D and Avenue E, US Hwy 67, between 6th and 7th Streets.

Alpine makes a central base for exploring area attractions: the Big Bend National Park, Big Bend Ranch State Park, Fort Davis National Historic Site, Davis Mountains State Park with its Indian Lodge, the Chihuahuan Desert Nature Center and Botanical Gardens, and the McDonald Observatory, perched atop Mt Locke at 6,790 feet. Also worth visiting are Marathon with its iconic Gage Hotel; the historic hotel Limpia and B&B's of Fort Davis; Marfa with the Chinati Foundation museum of Minimalist Art; the ghost town of Terlingua and the golf resort of Lajitas; and the River Road, FM 170, a 120-mile scenic route thru the majestic Rio Grande valley between Presidio and the Big Bend parks.

Attractions in and close to Alpine

Museum of the Big Bend, fun and informative displays, a children's corner, and a quality gift shop, on the campus of Sul Ross State University, giving background information on sights in the Big Bend Region.

Turner Range and Animal Science Center, hosts several rodeos and horse shows during the year at the covered S.A.L.E. Arena. At other times, students can be seen practicing their skills in the outdoor arena. The facility is near the main campus of Sul Ross.

Historic Walking/Windshield Tour, pass historic homes, churches, and other sites, and thru the Main Street City downtown district with several murals, following a brochure available at the Chamber of Commerce.

Restaurant scene, The Murphy St Raspha Co. features an upscale snow-cone of syrup over soft smooth ice atop ice cream. Restaurants range from the Reata with reservations suggested, the Saddle Bar on Holland Ave. and the Century Grill in the Holland Hotel, to the Cow Dog, an enormously popular food truck, and many more.

Woodward Ranch, go prospecting on your own, the only place on earth with the Red Plumed Agate, along with other agates, geodes, and semiprecious stones. If you don't find any nuggets, the gift shop has them.

The Chamber of Commerce and Teri Smith have more information on other locations to seek examples of the various rocks in the area.

Stillwell Store - Hallie's Hall of Fame Museum, located out in the empty ranch lands, where you can appreciate the hard but fulfilling life of a woman in the Old West.

Blue Creek Trail, follow a scenic hiking path, mostly along dry stream channels, passing towering rocks of vivid earth tones. The first part is easy going, easy return, but the trail extends for many miles with greater challenges. Summer is truly hot, take lots of water, or take your hike in the fall, winter, or spring.

Alpine Country Club, next to Kokernot Field, has a popular 9-hole golf course.

Trappings of Texas, April 17–18, the 29th annual exhibit and sale of custom gear and Western art.

Theater of the Big Bend, June 26-July 19, 50th season features "rodeo production" of Annie Get Your Gun at the S.A.L.E. Arena.

Alpine Jazz Festival, September 18–19, free performances at the pavilion at the Ramada Inn.

ARTWALK2015, November 20–21, art spills from the galleries onto the streets and Arbolitos Park, with chalk art of the sidewalks, live music, and a parade of flags.

Parade of Lights, December, Date To Be Announced

A mural in the former Post Office at 109 West E St was painted as part of the New Deal make-work programs during the Great Depression. Surviving murals from the project are found in 60 or so Texas cities and towns. Completed in 1940, this mural is by a Spanish-born and trained artist, Jose Moya del Pino, who was living and working in San Francisco. In the foreground, three figures recline on a rocky overlook (somewhat improbably, but this is art, not photography). They are each reading: a book, a magazine, and a tabloid newspaper, celebrating how the Post Office brings information and education to small towns and even cattle ranches. On the horizon, the Twin Sisters peaks mark the location, with the town in the middle distance, including, at the behest of townspeople, the characteristic red brick buildings of the Sul Ross State campus.

In recent years, Alpine has served as an unofficial stop for bicyclists riding across the United States due to its location on the Adventure Cycling Association's Southern Tier Bicycle Route.

All content from Kiddle encyclopedia articles (including the article images and facts) can be freely used under Attribution-ShareAlike license, unless stated otherwise. Cite this article:
Alpine, Texas Facts for Kids. Kiddle Encyclopedia.