The Davis Mountains, originally known as Limpia Mountains, are a range of mountains in West Texas, located near Fort Davis, after which they are named. The fort was named for then United States Secretary of War and later Confederate President Jefferson Davis. They are a popular site for camping and hiking and the region includes Fort Davis National Historic Site and Davis Mountains State Park. The historical and architectural value of the fort, along with the rugged natural environment of the park are a significant destination for tourism in Texas. 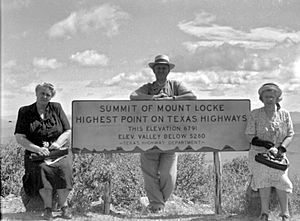 Most of the land in the Davis Mountains is under private ownership as ranch land, but the Nature Conservancy owns or has conservation easements on more than 100,000 acres (40,000 ha).

Rather than being a single coherent range, the Davis Mountains are an irregular jumble of isolated peaks and ridges separated by flatter areas. The mountains occupy a rough square about 50 km (31 mi) on each side. The mountains are of volcanic origin composed of strata associated with eruptions of the Trans-Pecos Volcanic Field 35 million years ago. The highest peak in the Davis Mountains is Mount Livermore at 2,555 m (8,383 ft) the fifth-highest peak in Texas.

The Davis Mountains are a sky island, an isolated mountain range surrounded by desert. The town of Fort Davis at the foot of the Davis Mountains has an elevation of 1,500 m (4,900 ft). From that elevation, the sky island rises to 2,555 m (8,383 ft). As the elevation increases, average temperatures decline and precipitation increases, permitting an "island" of forest and other mesic habitat at higher elevations. 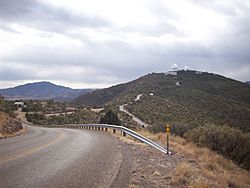 The most common vegetation of the Davis Mountains is montane grassland, often mixed with scattered bushes and trees. As is common in most Northern Hemisphere semiarid climates the vegetation on the southern slopes of the mountains is noticeably sparser than on the northern slopes. This is due to the greater exposure to the sun on southern slopes, thus warmer temperatures and drier soils.

The richest and most diverse of the woodlands and forests in the Davis Mountains are the mesic forests found from 1,770 to 2,330 m (5,810 to 7,640 ft). These forests are found in stream valleys and other well-watered areas. Indicator species are ponderosa pine and southwestern white pine, plus two small groves of quaking aspen at elevations of 2,300 m (7,500 ft) at the base of the cliffs surrounding the summit of Mount Livermore. Aspens are more characteristic of the higher elevations in the Rocky Mountains. The mesic woodlands are remnants of past glacial ages in which the climate of West Texas was more humid and cooler than at present.

Over 277 species of birds have been seen at Davis Mountains State Park. Many species found here are characteristic of more northerly mountain climes or alternatively of nearby Mexico, including 10 species of hummingbirds. Large mammals found here include whitetail deer, mule deer, elk, black bear, cougar, pronghorn, peccary, and introduced species such as aoudad and feral hogs. There is only one record of grizzly bears in Texas; it was killed in the Davis Range in 1890. Several private ranches in the Davis Mountains offer hunting opportunities. 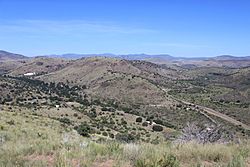 The Davis Mountains Preserve: Mount Livermore is left of center.

McDonald Observatory is accessed by Spur 78 from State Highway 118. Spur 78 is the highest state maintained road in Texas at 6,791 feet near the summit of Mt. Locke where the older telescopes of the observatory are located. Spur 77 branches off from Spur 78 providing access to the newer research equipment atop Mt. Fowlkes.

Rolling hills in the Davis Mountains

All content from Kiddle encyclopedia articles (including the article images and facts) can be freely used under Attribution-ShareAlike license, unless stated otherwise. Cite this article:
Davis Mountains Facts for Kids. Kiddle Encyclopedia.