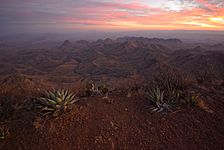 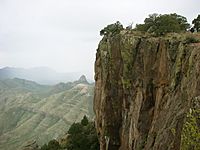 The Chisos Mountains were created by volcanic activity during the Eocene Epoch 35-44 million years ago.

The Chisos Mountains are located in Big Bend National Park. The range of mountains extends twenty miles from Punta de la Sierra in the southwest to Panther Junction in the northeast. An extensive trail system and permit-required backcountry campsites are maintained by Big Bend National Park for its visitors. The Northeast Rim and Southeast Rim trails are closed from February 1 through May 31 along with some of the backcountry campsites along these trails to protect the local peregrine falcon population.

The mountain area is partly forested (recovering from logging and overgrazing prior to the area's inclusion in the National Park System in the 1930s), and surrounded by the Chihuahuan Desert. The nearby towns include Study Butte, Terlingua, Fort Stockton, 135 miles north, Alpine, 105 mi (169 km) northwest and Presidio, about 100 mi (160 km) west. Two Mexican towns (Boquillas and Santa Elena) border the park; and cross-border access was reopened in 2011. 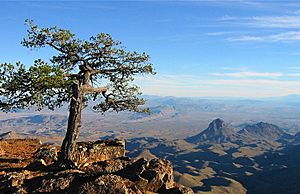 View from the South Rim.

All content from Kiddle encyclopedia articles (including the article images and facts) can be freely used under Attribution-ShareAlike license, unless stated otherwise. Cite this article:
Chisos Mountains Facts for Kids. Kiddle Encyclopedia.