Minimalism is a way of making modern art or music that uses simple ideas, sounds or shapes. It was most popular in America in the 1960s and 1970s. There are many different kinds of minimalism. Sometimes a simple thing is repeated many times until it seems very complicated. Today minimalism can be used to talk about many things such as design, architecture, poetry, and movies. 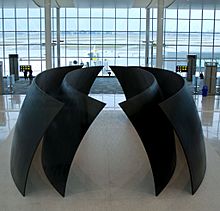 Tilted Spheres, a sculpture by Richard Serra at Pearson International Airport, Toronto. The piece is over 12 metres long.

In music, minimalism is a way of composing classical music which became popular during the second half of the 20th century. It is a way of composing by using a simple idea which is repeated many times. A minimalist piece of music usually takes a short idea which may be a melodic or a rhythmic pattern. This idea is then repeated many times, but each time it changes slightly. Sometimes this may be done by two or more instruments which start off by playing their notes or chords together but, as one is going slightly faster than the other, they gradually become “out of sync” (not synchronized, i.e. not together), then eventually they catch up with one another again. Usually this music is tonal so that it is firmly in one key. A steady pulse is kept throughout the whole piece.

Composers who wrote minimalist music include Steve Reich (b.1936), Philip Glass (b.1937) and Terry Riley (b.1935). Other composers like John Adams (b.1947) have also used minimalist ways of composing, but they combined these with other techniques, so that their music is not just minimalist.

Minimalist music became popular in the 1960s and 1970s. Minimalist composers started writing like this, also because a lot of new music at that time was very complicated and hard to understand. It was often serial music which was atonal with no obvious melodies or ideas that were easy to remember.

Minimalist music is not necessarily simple. It can have a kind of hypnotic effect, but this is part of what the composer wants. Reich’s Clapping Music just consists of hand clapping: there is no melody. He was thinking of African drum music when he wrote it. Two performers begin by clapping a rhythm together. After 13 seconds the second performer leaves out the first quaver (eighth note) and puts it at the end of the second bar (measure). After another 13 seconds this happens again so that in the end the two performers are together again. This music has to be listened to in a different way from other kinds of music.

Minimalism in visual art, sometimes referred to as literalist art and ABC Art emerged in New York in the 1960s. As a product it had much in common with earlier geometric abstraction and suprematism.

The term "minimalism" was not generally embraced by the artists associated with it, and many practitioners of art called minimalist by critics did not identify it as a movement as such.

One of the first artists specifically associated with Minimalism was the painter, Frank Stella, whose early "stripe" paintings were highlighted in the 1959 show, "16 Americans", organized by Dorothy Miller at the Museum of Modern Art in New York. The width of the stripes in Frank Stellas's stripe paintings were determined by the dimensions of the lumber, visible as the depth of the painting when viewed from the side, used to construct the supportive chassis upon which the canvas was stretched. The decisions about structures on the front surface of the canvas were therefore not entirely subjective, but pre-conditioned by a "given" feature of the physical construction of the support. In the show catalog, Carl André noted, "Art excludes the unnecessary. Frank Stella has found it necessary to paint stripes. There is nothing else in his painting".

These reductive works were in sharp contrast to the energy-filled and emotionally-charged expressionist paintings of Willem de Kooning or Franz Kline.

They leaned more towards the controlled, somber color field paintings of Barnett Newman and Mark Rothko. Although Stella received immediate attention from the MOMA show, artists like Kenneth Noland, Ralph Humphrey, Robert Motherwell and Robert Ryman had begun to explore stripes, monochromatic and hard-edge formats from the late 50s through the 1960s.

All content from Kiddle encyclopedia articles (including the article images and facts) can be freely used under Attribution-ShareAlike license, unless stated otherwise. Cite this article:
Minimalism Facts for Kids. Kiddle Encyclopedia.