Terrence Mitchell Riley (born June 24, 1935) is an American composer and performing musician best known as a pioneer of the minimalist school of composition. Influenced by jazz and Indian classical music, his music became notable for its innovative use of repetition, tape music techniques, and delay systems. He produced his best known works in the 1960s: the 1964 composition In C and the 1969 LP A Rainbow in Curved Air, both considered landmarks of minimalism and important influences on experimental, rock, and contemporary electronic music.

Raised in California, Riley began studying composition and performing solo piano in the 1950s. He befriended and collaborated with composer La Monte Young, and later became involved with the San Francisco Tape Music Center. A two-record deal with CBS in the late 1960s, resulting in an LP recording of In C (1968) and A Rainbow in Curved Air (1969), brought his work to wider audiences. In the 1970s, he began intensive studies with Hindustani singer Pandit Pran Nath. He has collaborated frequently throughout his career, most extensively with chamber ensemble the Kronos Quartet and his son, guitarist Gyan Riley.

Born in Colfax, California in 1935, Riley began performing as a solo pianist during the 1950s. During that decade, he studied composition at San Francisco State University, the San Francisco Conservatory, and University of California, Berkeley, studying with Seymour Shifrin and Robert Erickson. He befriended composer La Monte Young, whose earliest minimalist compositions using sustained tones were an influence; together, Young and Riley performed Riley's improvisatory composition Concert for Two Pianists and Tape Recorders in 1959–60. Riley later became involved in the experimental San Francisco Tape Music Center, working with Morton Subotnick, Steve Reich, Pauline Oliveros, and Ramon Sender. Throughout the 1960s he also traveled frequently in Europe, taking in musical influences and supporting himself by playing in piano bars. He also performed briefly with the Theatre of Eternal Music in New York.

His most influential teacher was Pandit Pran Nath (1918–1996), a master of Indian classical voice who also taught La Monte Young, Marian Zazeela, and Michael Harrison. Riley made numerous trips to India over the course of their association to study and accompany him on tabla, tambura, and voice. In 1971 he joined the Mills College faculty to teach Indian classical music. Riley also cites John Cage and "the really great chamber music groups of John Coltrane and Miles Davis, Charles Mingus, Bill Evans, and Gil Evans" as influences on his work. He was awarded an Honorary Doctorate Degree in Music at Chapman University in 2007.

Riley began his long-lasting association with the Kronos Quartet when he met their founder David Harrington while at Mills. Over the course of his career, Riley composed 13 string quartets for the ensemble, in addition to other works. He wrote his first orchestral piece, Jade Palace, in 1991, and has continued to pursue that avenue, with several commissioned orchestral compositions following. He is also currently performing and teaching both as an Indian raga vocalist and as a solo pianist.

Riley continues to perform live, and was part of the All Tomorrow's Parties festival in May 2011. 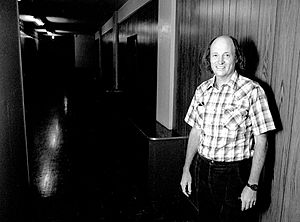 Riley's music is usually based on improvising through a series of modal figures of different lengths. Works such as In C (1964) and the Keyboard Studies (1964–1966) demonstrate this technique. The first performance of In C was given by Steve Reich, Jon Gibson, Pauline Oliveros and Morton Subotnick. Its form was an innovation: The piece consists of 53 separate modules of roughly one measure apiece, each containing a different musical pattern but each, as the title implies, in the key of C. One performer beats a steady pulse of Cs on the piano to keep tempo. The others, in any number and on any instrument, perform these musical modules following a few loose guidelines, with the different musical modules interlocking in various ways as time goes on.

In the 1950s Riley was already working with tape loops, a technology still in its infancy at the time; he would later, with the help of a sound engineer, create what he called a "time-lag accumulator". He has continued manipulating tapes to musical effect, in the studio and in live performances throughout his career. An early tape loop piece titled Music for the Gift (1963) featured the trumpet playing of Chet Baker. It was during Riley's time in Paris, while composing this piece, that he conceived of and created the time-lag accumulator technique. He has composed using just intonation as well as microtones. In New York City in the mid-1960s he played with his longtime friend La Monte Young, as well as with John Cale and tabla player Angus MacLise, who were founding members of The Velvet Underground. Riley is credited as inspiring Cale's keyboard part on Lou Reed's composition "All Tomorrow's Parties", which was sung by German actress Nico and included on the album The Velvet Underground and Nico, recorded in 1966.

Riley's famous overdubbed electronic album A Rainbow in Curved Air (recorded 1968, released 1969) inspired many later developments in electronic music. These include Pete Townshend's organ parts on The Who's "Won't Get Fooled Again" and "Baba O'Riley", the latter named in tribute to Riley as well as to Meher Baba. Charles Hazlewood, in his BBC documentary on Minimalism (Part 1) suggests that the album 'Tubular Bells' by Mike Oldfield was also inspired by Riley's example. 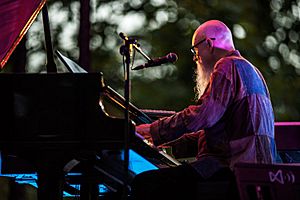 Riley's collaborators have included the Rova Saxophone Quartet, Pauline Oliveros, the ARTE Quartett, and, as mentioned, the Kronos Quartet. His 1995 Lisbon Concert recording features him in a solo piano format, improvising on his own works. In the liner notes Riley cites Art Tatum, Bud Powell and Bill Evans as his piano "heroes", illustrating the importance of jazz to his conceptions.

He has three children: one daughter, Colleen, and two sons, Gyan, who is a guitarist, and Shahn. He was married to Ann Riley until her death in 2015.

All content from Kiddle encyclopedia articles (including the article images and facts) can be freely used under Attribution-ShareAlike license, unless stated otherwise. Cite this article:
Terry Riley Facts for Kids. Kiddle Encyclopedia.