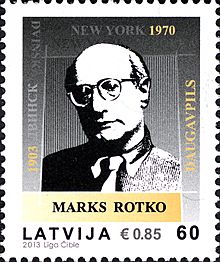 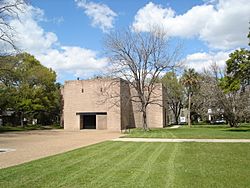 Mark Rothko (September 25, 1903 – February 25, 1970) was a Latvian-American modern artist. He was born in a part of the Russian Empire that is now in Latvia, but lived in America for most of his life. He was Jewish. He died at the age of 66.

His most famous work is known as abstract expressionism or color field painting. In 2012, one of his works sold for $86.9 million.

Rothko's work matured into rectangular fields of color and light. However, between the early period, and the later fields of color, was a long period of transition, marked by two important events in Rothko's life: the onset of World War II and his reading of Friedrich Nietzsche.

From October 1948, after the death of his mother, Rothko started using symmetrical rectangular blocks of two to three opposing or contrasting, yet complementary, colors. Also, for the next seven years, Rothko painted in oil only on large canvases with vertical formats. Very large-scale designs were used to overwhelm the viewer, or to make the viewer feel "enveloped within" the painting. For some critics, the large size was an attempt to make up for a lack of substance. In retaliation, Rothko stated:

"I realize that historically the function of painting large pictures is painting something very grandiose and pompous. The reason I paint them, however . . . is precisely because I want to be very intimate and human. To paint a small picture is to place yourself outside your experience, to look upon an experience as a stereopticon view or with a reducing glass. However you paint the larger picture, you are in it. It isn’t something you command".

He even suggested that viewers position themselves as little as eighteen inches away from the canvas so that they might experience a sense of intimacy, as well as awe, a transcendence of the individual, and a sense of the unknown.

All content from Kiddle encyclopedia articles (including the article images and facts) can be freely used under Attribution-ShareAlike license, unless stated otherwise. Cite this article:
Mark Rothko Facts for Kids. Kiddle Encyclopedia.