The Rothko Chapel is a non-denominational chapel in Houston, Texas, founded by John and Dominique de Menil. The interior serves not only as a chapel, but also as a major work of modern art. On its walls are fourteen black but color-hued paintings by Mark Rothko. The shape of the building, an octagon inscribed in a Greek cross, and the design of the chapel was largely influenced by the artist. The chapel sits two miles southwest of downtown in a suburban neighborhood situated between the building housing the Menil Collection and the Chapel of Saint Basil on the campus of the University of Saint Thomas. About 55,000 people visit the chapel each year.

Susan J. Barnes states "The Rothko Chapel...became the world's first broadly ecumenical center, a holy place open to all religions and belonging to none. It became a center for international cultural, religious, and philosophical exchanges, for colloquia and performances. And it became a place of private prayer for individuals of all faiths"

On September 16, 2000, the Rothko Chapel was placed on the National Register of Historic Places.

In 1964 Rothko was commissioned by John and Dominique de Menil (also founders of the nearby Menil Collection) to create a meditative space filled with his paintings. The works are site-specific, one of the requirements of the program. As Rothko was given creative license on the design of the structure, he clashed with the project's original architect, Philip Johnson over the plans for the chapel. The plans went through several revisions and architects. Rothko continued to work first with Howard Barnstone and then with Eugene Aubry, but ultimately he did not live to see the chapel's completion in 1971. Rothko died in his New York studio on February 25, 1970.

From 1973 onward, the Rothko Chapel doubled as a center for colloquiums aimed at fostering mutual understanding on issues affecting justice and freedom throughout the world. The first colloquium drew scholars from Lebanon, Iran, India, Pakistan, Nigeria, Japan, Italy, the United States and Canada. In 1981, it initiated “The Rothko Chapel Awards to Commitment to Truth and Freedom." In 1986, a second award was established to honor and emulate the spirit of Óscar Romero, Archbishop of San Salvador, who was murdered on March 24, 1980. These Rothko Chapel Awards have recognized individuals and organizations who, at great risk, denounce violations of human rights. In 1991 the Rothko Chapel marked its 20th anniversary with a joint award with the Carter-Menil Human Rights Foundation, founded in 1986 with former President Jimmy Carter. Nelson Mandela was the keynote speaker and received the special Rothko Chapel award.

In early 1999, the Rothko Chapel closed for a major renovation. The paintings had been exhibiting premature signs of age, and the largest could not be removed for treatment. In 2000, the chapel reopened after an 18-month, $1.8 million renovation, with the artist's paintings newly restored.

The chapel is an irregular octagonal brick building with gray or rose stucco walls and a baffled skylight. It serves as a place of meditation as well as a meeting hall and is furnished with eight simple, moveable benches for meditative seating; more are provided to accommodate the audience for special events. Holy books from several religions are available.

The chapel is associated with several works of art other than the building itself, in the fields of painting, sculpture, and music. 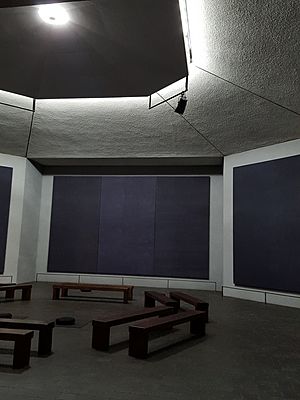 Fourteen of Rothko's paintings are displayed in the chapel. Three walls display triptychs, while the other five walls display single paintings. Beginning in 1964, Rothko began painting a series of black paintings, which incorporated other dark hues and texture effects. A typical question raised by visitors viewing the massive black canvases which adorn the walls of the chapel includes some variant of: "Where are the paintings?"

The de Menils offered Rothko a commission for the chapel in 1964. From the fall of 1964 through the spring of 1967, he painted the fourteen large paintings and four alternates, which incorporated many of the characteristics of the earlier 1964 black paintings. 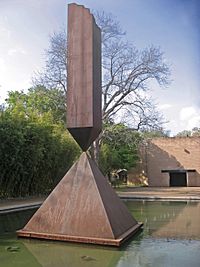 Broken Obelisk in front of the Rothko Chapel

A distinctive sculpture by Barnett Newman, Broken Obelisk, was installed in 1970 in front of the chapel. The sculpture sits in a reflecting pool designed by Philip Johnson and it is dedicated to the memory of Martin Luther King Jr., who was assassinated in 1968. The sculpture originally stood in Washington, D.C. and was offered in 1969 by the de Menils as a memorial to King to stand in front of Houston City Hall. Houston turned down the gift and the de Menils then donated the sculpture and the Rothko paintings to start the Rothko Chapel.

One of Morton Feldman's best known pieces of music was inspired by and written to be performed in the chapel — it too is called Rothko Chapel (1971). The musician Peter Gabriel wrote a song called "Fourteen Black Paintings" which was inspired by a visit to the chapel. David Dondero composed a song entitled "Rothko Chapel" that appears on his 2007 album Simple Love. Visiting Tibetan Gyuto Tantric monks performed harmonic chanting in April 1986. Houston Grand Opera's HGOco commissioned and premiered an opera in 2017 about the chapel called Some Light Emerges', with music by Laura Kaminsky, concept by Mark Campbell and libretto by Mark Campbell and Kimberly Reed.

As a focal point of dialogue between social justice, artistic, and spiritual leaders, the Rothko Chapel has been the recipient of several notable awards and people. The Rothko Chapel also hosts the biannual Óscar Romero Award to recognize "courageous, grassroots, human rights advocacy."

On May 18, 2018, museum staff discovered the Chapel had been vandalized. White paint was spilled near the Chapel's entrance and in the reflecting pool surrounding the Broken Obelisk sculpture. Handbills had been strewn around the grounds and pool that read, "It's okay to be white."

All content from Kiddle encyclopedia articles (including the article images and facts) can be freely used under Attribution-ShareAlike license, unless stated otherwise. Cite this article:
Rothko Chapel Facts for Kids. Kiddle Encyclopedia.