Van Horn is a town in and the county seat of Culberson County, Texas, in the United States. According to the 2010 census, Van Horn had a population of 2,063, down from 2,435 at the 2000 census. It is the westernmost incorporated community in the Central Time Zone part of the state of Texas. Greyhound Lines has a stop in the town, by Wendy's.

According to the United States Census Bureau, the town has a total area of 2.8 square miles (7.3 km2), all land. Threemile Peak (or Threemile Mountain), elevation 4,868 feet (1,484 m), rises to the northwest overlooking the town.

Van Horn is the westernmost town in the U.S. Central Time Zone. 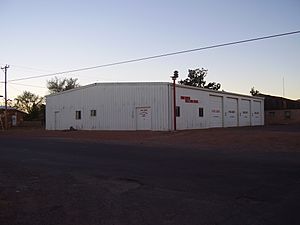 Anglo-Texan settlement began in the late 1850s and early 1860s supportive of the San Antonio-El Paso Overland Mail route. Although U.S. Army Major Jefferson Van Horne is believed to have passed near the area in 1849 on his way to take command of what would later become Fort Bliss, the town is instead named for Lt. James Judson Van Horn who commanded an army garrison at the Van Horn Wells beginning in 1859. Lt. Van Horn's command was relatively short-lived, as the post was seized by Confederate forces in 1861 and Lt. Van Horn taken prisoner. Settlement was further stimulated by the construction of the Texas and Pacific Railway in 1881. The town has several buildings on the National Register of Historic Places including the First Presbyterian Church (now Primera Iglesia Bautista), built in 1901. 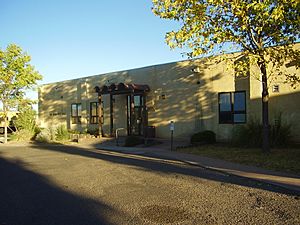 In late 2006, The Wall Street Journal reported that Jeff Bezos, founder and CEO of amazon.com, had acquired 290,000 acres (1,200 km2) of land 25 miles (40 km) north of Van Horn, including the Figure 2 Ranch Airport, to house his fledgling space tourism company, Blue Origin. As of 2008[update], Blue Origin had been expected to start commercial operations as early as 2010, aiming for 52 launches per year from the Van Horn facility.

In early 2010, NASA awarded Blue Origin US$3.7 million to work on an advanced technology, which detaches a crew cabin from its launcher if the shuttle malfunctions.

As of August 2016, Blue Origin was still conducting test flights with plans to begin flying piloted tests in 2017 and paying customers in 2018.

In 2009 the Van Horn Advocate announced that the Long Now Foundation was starting geologic testing for an underground space to house a 10,000-year Clock of the Long Now, on the Bezos ranch, north of Van Horn.

All content from Kiddle encyclopedia articles (including the article images and facts) can be freely used under Attribution-ShareAlike license, unless stated otherwise. Cite this article:
Van Horn, Texas Facts for Kids. Kiddle Encyclopedia.