Culberson County is a county located in the U.S. state of Texas. As of the 2010 census, its population was 2,398. The county seat is Van Horn. Culberson County was founded in 1911 and organized the next year. It is named for David B. Culberson, a lawyer and Confederate soldier in the American Civil War.

Culberson County is in the Central Time Zone, however, northwestern Culberson County unofficially observes Mountain Time. It is one of the nine counties that comprise the Trans-Pecos region of West Texas. 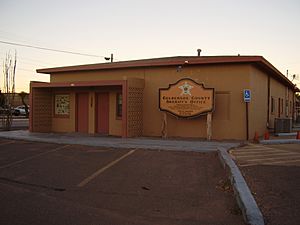 Prehistoric Clovis culture peoples in Culberson County lived in the rock shelters and caves nestled near water supplies. These people left behind artifacts and pictographs as evidence of their presence. With its treacherous topography, the area remained untouched by white explorations for centuries.

Jumano Indians led the Antonio de Espejo 1582-1583 expedition near Toyah Lake on a better route to the farming and trade area of La Junta de los Ríos. Espejo's diary places the Jumano along the Pecos River and its tributaries.

Antonio de Espejo was also the first white person to see the Mescalero Apache just east of the Guadalupe Mountains. The Mescalero frequented the area to irrigate their crops. In 1849 John Salmon "RIP" Ford explored the area between San Antonio and El Paso noting in his mapped report the productive land upon which the Mescalero Indians farmed. By the mid-17th Century the Mescaleros expanded their territory to the Plains Navajos and Pueblos from the Guadalupes, and El Paso del Norte. Their feared presence in the area deterred white settlers. January 1870, a group of soldiers attacked a Mescalero Apache village near Delaware Creek in the Guadalupe Mountains. July 1880 soldiers at Tinaja de las Palmas attacked a group of Mescaleros led by Chief Victorio. August 1880, Buffalo Soldiers ambushed Victorio at Rattlesnake Springs. Victorio retreated to Mexico and was killed in October by Mexican soldiers.

The demand for new routes from Texas to California caused an uptick in explorations. The San Antonio to El Paso leg of the San Antonio-California Trail was surveyed in 1848 under the direction of John Coffee Hays.

Lt. Francis Theodore Bryan camped at Guadalupe Pass while exploring a route from San Antonio to El Paso via Fredericksburg. Upon reaching El Paso in July 1849 his report recommended sink wells along the route. July 1848, Secretary of War William L. Marcy wanted a military post established on the north side of the Rio Grande. Maj. Jefferson Van Horne was sent out in 1849 to establish Marcy's goal.

John Russell Bartlett, was commissioned in 1850 to carry out the Treaty of Guadalupe Hidalgo. Bartlett declared the Guadalupe Mountains dark and gloomy, and proposed a transcontinental railroad be built south of the peaks. Three years later, Capt. John Pope was sent to scout out a railroad route, and in the succeeding year to search for artesian water supplies.

The San Antonio-San Diego Mail Line and the Butterfield Overland Mail both serviced the area 1857-1861. These mail coaches provided a means for travelers to reach California in 27 days, if the passenger had the $200 for a one-way fare and was courageous enough to withstand the weather and dangers en route.

Rival railway companies began competing for rights of way. The Texas and Pacific Railway and the Galveston, Harrisburg and San Antonio Railway eventually reached an agreement to share the tracks. 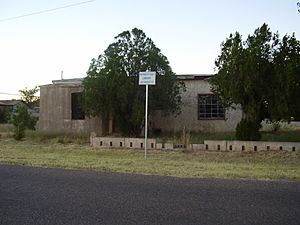 Culberson County was established in 1911 from El Paso County and named after David B. Culberson. The county was organized in 1912. Van Horn became the county seat.

With the opening of the railways, ranchers began to settle in the county. Lobo was settled in part due to misreprentation by promoters. A class action lawsuit by the residents forced the promoters to build the Lobo Hotel. Unfortunately, the area was struck by two powerful earthquakes - one in 1929, and the 6.0 quake near Valentine that was felt as far away as Dallas. The hotel was destroyed.

Guadalupe Mountains National Park was established in 1972. President Lyndon B. Johnson signed the 1966 legislation to create the park. Stipulation was made that all mineral, oil and gas rights had to be ceded to the Federal government. 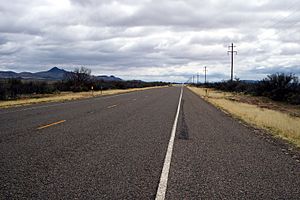 All content from Kiddle encyclopedia articles (including the article images and facts) can be freely used under Attribution-ShareAlike license, unless stated otherwise. Cite this article:
Culberson County, Texas Facts for Kids. Kiddle Encyclopedia.