Eddy County is a county located in the U.S. state of New Mexico. As of the 2010 census, the population was 53,829. Its county seat and largest city is Carlsbad. The county was created in 1891 and later organized in 1892. It is north of the Texas state line.

Carlsbad Caverns National Park is located in this county. Eddy County is the location of the Waste Isolation Pilot Plant.

In 1866, Charles Goodnight and Oliver Loving drove vast herds of cattle along the Pecos and set up "cow camps" in Seven Rivers and what is now Carlsbad. John Chisum soon joined them and brought an estimated 100,000 head of cattle of his own through the Pecos Valley.

In 1881, Charles B. Eddy came to the area, and with his brother, John, and partner Amos Bissell, developed the Eddy-Bissell Cattle Company. In 1884, the Eddy brothers and Bissell broke ground on the Halagueno Ranch which encompassed an area from Seven Rivers to La Huerta (a suburb of Carlsbad). In 1887, Eddy built the Halagueno diversion ditch on the Pecos, three miles above the site of the Avalon Dam (which was completed in 1890) and incorporated the venture, calling it the Pecos Valley Land and Ditch Company. Eddy was looking to entice Europeans to settle the area, and with the new Halagueno Ranch and the Pecos Valley Land and Ditch Company established, he sought funds from a Swiss bank to help attract them to the clean air and sunny climate.

In 1888, Patrick Garrett (known as the sheriff who had shot Billy the Kid) along with promoter Charles Greene, joined forces with Eddy to design and build a system of canals and flumes to divert water to their ranches and properties. Greene was able to procure investors from the east, one of which was Robert W. Tansill (manufacturer of the "Punch 5 ¢ Cigar"). These men, along with another big investor, J.J. Hagerman, laid the plans for a new town on the west bank of the Pecos River. The men had the town incorporated as Eddy on September 15, 1888.

The county was named for cattle rancher Charles B. Eddy. When the territorial legislature set the boundaries of Eddy County, in 1889, Seven Rivers was named the county seat. During an election in 1890 for new county commissioners, a referendum was on the ballot to change the seat from Seven Rivers to the town of Eddy. The referendum passed by a vote of 331 to 83. In that year, the census said Eddy had only 278 people and they cast 241 of the winning votes. The referendum also included the building of a courthouse. Charles Eddy donated the land which consisted of an entire town block. The county commissioners authorized a contract for $30,000 to build a brick courthouse. (In 1899, the town of Eddy changed its name to Carlsbad.)

On January 10, 1891, the first railroad train on the new Pecos Valley Railroad arrived in Eddy, from Pecos, Texas. Crops of cotton and alfalfa, (which were found to be the perfect crops for the Eddy County area), along with cattle, sheep, wool, and people, could be moved into and out of the area with ease, now. This brought more investors and many more settlers into the area.

In 1902, Carlsbad Caverns were discovered about 18 mi (29 km) southwest of Carlsbad town. The discovery is still disputed between Jim White and Abijah Long. The caves are now known as Carlsbad Caverns National Park. The caverns have brought many millions of visitors from around the world into Eddy County.

Oil was discovered in Eddy County in 1909, near the town of Dayton (8 mi south of Artesia). Another big oil strike happened in 1923, when Martin Yates, Jr., purchased a well near Artesia, and southeastern New Mexico was said to be "gushing oil!". Drilling commenced at a furious pace and by 1938, the area's oil production was valued at $32 million annually.

In 1925, a geologist, Dr. V. H. McNutt, discovered major deposits of potash, while looking for oil east of Carlsbad. This ushered in a "boom" in potash mining, and several large potash producers set up business in the area. 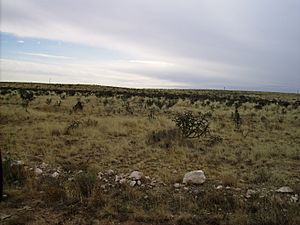 Within the Myst and Uru series of computer games, Eddy County is the location of The Cleft, a fissure near a dormant volcano leading down to the large D'ni Cavern. This is most likely a reference to Carlsbad Caverns National Park.

All content from Kiddle encyclopedia articles (including the article images and facts) can be freely used under Attribution-ShareAlike license, unless stated otherwise. Cite this article:
Eddy County, New Mexico Facts for Kids. Kiddle Encyclopedia.