Loving County is a county in the U.S. state of Texas. With a population of 64 per the 2020 census, it is the least-populous county in the United States. Its county seat and only community is Mentone. The county was originally created in 1887, and after being disorganized in 1897, was reorganized in 1931.

Prehistorically, the area had many springs with potable water that supported wildlife and nomadic hunters. Antonio de Espejo visited the area in 1853 and crossed the Pecos River. Having surveyed the area in 1854 for a railroad company, John Pope returned in 1855 to start a camp in northwestern Loving County and establish artesian wells in the area, but the venture was unsuccessful and was abandoned in 1861.

From 1837 to 1874, the area of modern Loving County was part of the Bexar land district. In 1874 it was separated from Bexar County, becoming a part of Tom Green County.

Loving County is named for Oliver Loving, a cattle rancher and pioneer of the cattle drive who, along with Charles Goodnight, developed the Goodnight-Loving Trail. He was mortally wounded by members of the Comanche nation while on a cattle drive in 1867 in the vicinity of the county.

Loving is the only county in Texas to be incorporated twice, first in 1893 and again in 1931. Its initial organization was effected by a canal company founded in Denver, Colorado, and appears to have been based upon fraud and willful misrepresentations made by the founders to state officials. After a local landowner hired a New York City firm to investigate alleged improprieties in county government, the company's organizers fled, taking with them all the county records. The state legislature subsequently disincorporated Loving in 1897, attaching it to Reeves County.

Oil was discovered in 1921, leading to a population increase in Loving County. By 1930, there were 195 residents, mostly living in what would become the town of Mentone, which became the county seat when Loving was reconstituted in 1931. By 1933, the population had peaked at 600, only to begin a steady decline which had continued until recently.

Loving County was the home of the first elected female sheriff in Texas, Edna Reed Clayton Dewees. Dewees was appointed to the job in January 1945, then won an election to continue in the office through 1947. She never carried a firearm, and reported only two arrests during her entire term. Later she would return as a county district clerk, a job she held from 1965 to 1986. After retirement she lived on a ranch near Mentone until 22 January 2009 when she died in Del Rio. 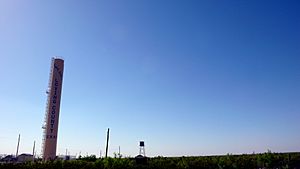 Water tower in the county

The Pecos River is the county's western boundary, forming the Red Bluff Reservoir along its northwestern border with Reeves County, Texas and Eddy County, New Mexico. The terrain of Loving County is described as flat desert, with a few low hills. Desert shrubs, range grass and cacti abound, with salt cedars along the river. Elevations vary from 2,686 to 3,311 feet (1,009 m) above sea level.

Loving is the smallest county by area in the Permian Basin region.

According to the 2020 U.S. census, 64 people lived in the county, down from 67 people, 31 households, and 19 families living in the county in 2000. The county had been the least-populous county in the United States, with a 2010 census population of only 82 persons (an increase of 22.4% over the 2000 figure of 67 residents), but the 2015 estimate by the U.S. Census Bureau places it as the second-least populous county nationwide. With an average of only 0.0646 inhabitants/km2 (0.167/sq mi) as of 2015, the county is also the least-densely populated county outside of Alaska. Lake and Peninsula Borough and North Slope Borough in Alaska are both lower, as is the Yukon-Koyukuk census area.

Of its population since 2000 the majority have been non-Hispanic white, though six identified as "some other race" and one person identified as multiracial. In addition, at the 2000 census, seven people identified as being of Hispanic, Latino, or Spanish origin of any race. It is one of only a few counties in the U.S. outside of the Northeast where the largest self-identified ancestry group is Irish American.

Of the 31 households in 2000, five had children under the age of 18 living with them, 17 were married couples living together, two had a female householder with no husband present, and 11 were not families. Ten households were made up of individuals, and two consisted of someone living alone who was 65 years of age or older. Average household size was 2.16, while the average family size was 2.65. In 2020, there were 25 households and 13 were married couples living together.

From 2015 to 2019, the median household income for the county was $83,750, up from $40,000 in 2000. Owing partly to its small and dispersed population, it has the highest median per capita and household income of any county in Texas. Loving County was the only county in the United States with no people below the poverty line as of 2000. However, as of 2010, this was no longer true.

"Loving County" is the name of a song written and performed by Charlie Robison. It appears on his 1998 album Life of the Party.

Loving County's economy is based almost entirely upon oil and gas drilling raking 4th in the state for BOE produced, ranching, and county services.

Loving County is served by the Wink-Loving Independent School District. The county's school system was closed and consolidated into Wink's ISD in 1972 because the enrollment had fallen to two pupils.

All content from Kiddle encyclopedia articles (including the article images and facts) can be freely used under Attribution-ShareAlike license, unless stated otherwise. Cite this article:
Loving County, Texas Facts for Kids. Kiddle Encyclopedia.