Kermit is a city in and the county seat of Winkler County, Texas, United States. The population was 5,708 at the 2010 census. The city was named for Kermit Roosevelt after a visit by his father Theodore Roosevelt to the county. 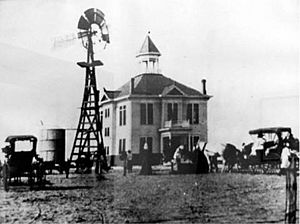 Kermit began as a convenient supply center for the scattered ranches of the area. Kermit became the seat of Winkler County when the county was organized in 1910. The first public school and the post office opened the same year. The town's namesake, Kermit Roosevelt, once visited the T Bar Ranch in northern Winkler County to hunt antelope a few months before the town was named. In 1916, the county suffered a drought. Many homesteaders and ranchers were forced to leave. In 1924 only Ern Baird's family remained in the town. Only one student attended school in the county for five months of 1924. Only three houses and the courthouse were in use by 1926.

The Great Depression had little effect on the city throughout much of the 1930s; however, the population declined drastically in the early 1930s, but both population and business figures rose at the end of the 1930s, when 2,700 residents and 180 businesses were listed. On February 15, 1938, residents voted to incorporate. During the 1940s, the oil boom caused real estate prices to double. Housing was scarce, and some people lived in tents. A bank was opened by 1945. The grade school had to be enlarged, and a hospital was built.

In the 1950s the town continued to grow; housing additions were built. By 1960, the city had a population of 10,465 and 260 businesses, and additional growth estimated to be over 12,000 during the decade. Flooding became a problem because of the flat terrain, therefore new crown streets were constructed to solve the flooding problem, and more housing additions were built. The town moved the last working wooden derrick in the Permian Basin from Loving County to Pioneer Park in Kermit in 1966 as a symbol of the importance of the oil industry to the economy of Kermit and Winkler County. In the 1970s and 1980s, the population of Kermit bounced between 8,500 and 6,912, and the number of businesses moved between 200 and 116. Improvements were made in city services, and more housing additions were built. The 1990 United States census set the population of Kermit at 6,875.

This area has a large amount of sunshine year round due to its stable descending air and high pressure. According to the Köppen Climate Classification system, Kermit has a mild desert climate, abbreviated "Bwh" on climate maps.

All content from Kiddle encyclopedia articles (including the article images and facts) can be freely used under Attribution-ShareAlike license, unless stated otherwise. Cite this article:
Kermit, Texas Facts for Kids. Kiddle Encyclopedia.