Odessa is a city in and the county seat of Ector County, Texas, United States. It is located primarily in Ector County, although a small section of the city extends into Midland County. Odessa's population was 114,428 at the 2020 census, making it the 28th-most populous city in Texas; It is the principal city of the Odessa metropolitan statistical area, which includes all of Ector County. The metropolitan area is also a component of the larger Midland–Odessa combined statistical area, which had a 2010 census population of 278,801; a recent report from the United States Census Bureau estimates that the combined population as of July 2015 is 320,513. In 2014, Forbes magazine ranked Odessa as the third-fastest-growing small city in the United States. In 1948 Odessa was also the home of First Lady Barbara Bush, and the onetime home of former Presidents George H. W. Bush and George W. Bush. Former President George H.W. Bush has been quoted as saying "At Odessa we became Texans and proud of it."

Odessa is said to have been named after Odessa, Ukraine, because of the local shortgrass prairie's resemblance to Ukraine's steppe landscape.

Odessa was founded in 1881 as a water stop and cattle-shipping point on the Texas and Pacific Railway. The first post office opened in 1885. Odessa became the county seat of Ector County in 1891 when the county was first organized. It was incorporated as a city in 1927, after oil was discovered in Ector County on the Connell Ranch southwest of Odessa.

Odessa is located along the southwestern edge of the Llano Estacado in West Texas. It is situated above the Permian Basin, a large sedimentary deposit that contains significant reserves of oil and natural gas.

Odessa has the semiarid climate typical of West Texas. Summers are hot and sunny, while winters are mild and dry. Most rainfall occurs in late spring and summer; snowfall is rare. The area exhibits a large diurnal temperature range and frequent high winds. 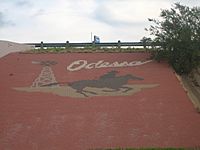 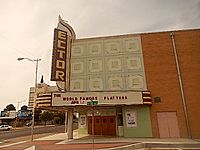 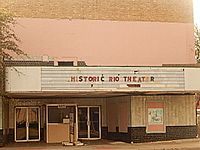 The abandoned Rio Theater on North Grant Street in Odessa opened in 1947 as the Scott Theater. In 2010, a community group attempted to acquire the building. 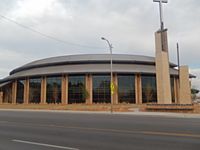 First Baptist Church in downtown Odessa; pastor Byron V. McWilliams (2014), a former accountant for an oil company in Houston and a two-term past president of Southern Baptists of Texas 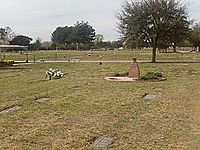 Sunset Memorial Gardens at 6801 Interstate 20E is one of two cemeteries in Odessa; the other, Ector County Cemetery, at 300 S Dixie Blvd.

The Midland–Odessa Symphony and Chorale (MOSC) was founded in 1962, and is the region's largest orchestral organization, presenting both Pops and Masterworks concerts throughout the year. Composed of professional musicians from the area, as well as Lubbock, San Angelo, and other surrounding cities, the MOSC is also home to three resident chamber ensembles: the Lone Star Brass, Permian Basin String Quartet, and West Texas Winds. These ensembles are made up of principal musicians in the orchestra, who come to the area from across the United States.

The Globe of the Great Southwest, located on the campus of Odessa College, the community college in Odessa, features an authentic replica of William Shakespeare's Globe Theatre. It hosts plays and other community groups throughout the year, as well as an annual Shakespeare festival.

Built in 1951, the Ector Theater served as one Odessa's finest theaters until it closed. Today, the renovated 700-seat theater provides the community with classic movies, live theatrical productions, and concerts.

The Permian Playhouse has provided music, dance, drama, suspense, and comedy for over 40 years.

The Odessa Jackalopes junior A ice hockey team plays its home games at Ector County Coliseum. High school football is also popular. Ratliff Stadium, which was featured in the movie Friday Night Lights, is home to the Odessa Bronchos and the Permian Panthers. It is one of the largest high school stadiums in the state, listed as seventh in capacity within Texas. 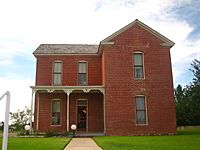 The White-Pool House, built in 1887, is the oldest structure still standing in Odessa. Open to visitors at 112 East Murphy Street near South Grant Avenue, the building is listed on the National Register of Historic Places. 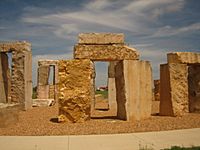 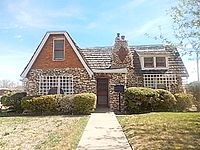 Parker Ranch House Museum at 1118 Maple Ave.; the restored structure was once the headquarters of a ranch that includes 175 sections of land in Andrews and Ector counties. Owned from the 1930s to the 1950s by Jim and Bessie Parker, the museum features exhibits of the ranching family.

Odessa's Presidential Museum and Leadership Library, on the campus of the University of Texas of the Permian Basin, is the only facility of its kind in the United States—dedicated to the office of the Presidency, not any particular occupant of the Oval Office. There are also displays about the Presidents of the Republic of Texas. The museum was pushed to fruition by the late State Representative George "Buddy" West of Odessa. The building itself is named for West and his wife, Shirley.

After fighting financial hardships, the Presidential Museum closed its doors to the public as of 21 August 2009. In February 2010, additional funding allowed the doors to reopen, with negotiations pending for the University of Texas of the Permian Basin to take control of the museum.

The White-Pool House east of downtown is the oldest surviving structure in Odessa. It was built in 1887 and opened as an historic house museum in 1984.

Texon Santa Fe Depot, recently relocated to West Odessa, serves as a museum in honor of the old west and the railroads.

The Parker House Museum is Odessa's newest addition to the historical records of Odessa. In 1935, the Parker family moved into this modest house located on 1,290 acres (5.2 km2). It represents the lifestyle of a prominent ranching family, who served the communities of Andrews and Ector Counties since 1907.

Odessa Meteor Crater, an impact crater 550 feet (170 m) in diameter, is located southwest of the city.

Odessa has a Stonehenge replica on the campus of the University of Texas of the Permian Basin. Completed in 2004, the replica is horizontally equal to the Stonehenge in England, but only 70% of the vertical height of the original.

The jack rabbit has become the symbol of Odessa. Beginning in 1932, Odessa held a rodeo for roping rabbits. In one competition, cowgirl Grace Hendricks roped a rabbit from horseback in five seconds and beat her male competitors. The unusual rodeo ended in 1977 because of objections from the Humane Society. Many businesses and residences about Odessa display models of rabbits.

Midland International Airport is served by:

Midland Spaceport is served by: 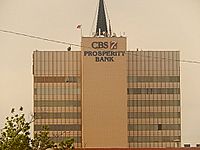 Prosperity Bank Building is the tallest building in Odessa.

Oil Pumpjacks seen in an oil field in Penwell, west of Odessa in 2006. The oil industry has been Odessa’s main economy since the 1920s. 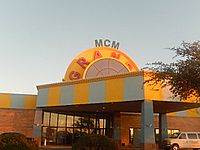 Historically, the Odessa economy has been primarily driven by the area's oil industry, booming and busting in response to rises and falls in the crude oil price. Many of the city's largest employers are oilfield supply companies and petrochemical processing companies. In recent decades, city leaders have begun trying to decrease the city's reliance on the energy industry to moderate the boom-bust cycle and develop greater economic sustainability.

Odessa has also taken steps to diversify the energy it produces. A new wind farm has been constructed in northern Ector County. A new coal pollution mitigation plant has been announced for a site previously entered in the Futuregen bidding. The new plant will be run by Summit Power and will be located near Penwell. This new plant could lead to the creation of 8,000 jobs in the area. Plans are in place for a small nuclear reactor called the High-Temperature Teaching and Test Reactor to be run as a test and teaching facility in conjunction with the nuclear engineering department at University of Texas of the Permian Basin. This reactor is planned to be near Andrews.

Odessa's main enclosed shopping mall is Music City Mall, which includes Dillards, JC Penney, At Home, Burlington Coat Factory, an indoor ice skating rink, and CBS News. Construction of new retail in recent years has been concentrated on the city's northeast side. In November 2007, the city approved a contract with a company that develops armaments for US Army helicopters to begin operations in Odessa.

As in many municipalities, some of the largest employers are in the education, government, and healthcare industries. Outside of those areas, the city's major employers are concentrated in the oil industry. According to the city's 2018 Comprehensive Annual Financial Report, the top employers in the city are:

University of Texas of the Permian Basin

The University of Texas of the Permian Basin (UTPB) began in 1973. UTPB was an upper level and graduate university until the Texas Legislature passed a bill in spring 1991 to allow the university to accept freshmen and sophomores. As of 2006, the university was holding discussions with the Nuclear Regulatory Commission about the construction of a new High-Temperature Teaching and Test Reactor, which if successful, would finish licensing and construction around 2012. It would be the first university-based research reactor to be built in the US in roughly a decade, and be one of the few HTGR-type reactors in the world. In January 2006, UTPB's School of Business was awarded accreditation by the Association to Advance Collegiate Schools of Business International, which is generally regarded as the premier accreditation agency for the world's business schools. According to the university, only 30% of business schools in the United States, and 15% of world business schools, have received AACSB accreditation. 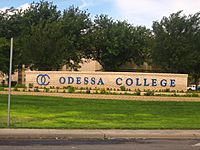 Odessa College is a public, two-year college based in Odessa, serving the people of Ector County and the Permian Basin. It opened in 1952 and currently enrolls about 6,000 annually in its university-parallel and occupational/technical courses, and 11,000 students annually in its basic education, continuing education, and community recreation courses. 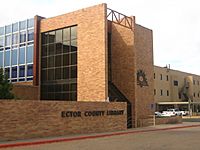 All content from Kiddle encyclopedia articles (including the article images and facts) can be freely used under Attribution-ShareAlike license, unless stated otherwise. Cite this article:
Odessa, Texas Facts for Kids. Kiddle Encyclopedia.