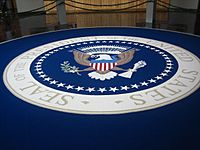 The Presidential Archives and Leadership Library (formerly, the Presidential Museum) is a museum and library complex located at 4919 East University Blvd. in Odessa, Texas, on the campus of the University of Texas of the Permian Basin. Unlike the many presidential libraries, the museum is dedicated to the office of the President of the United States, rather than any individual who has held the position. The museum-library was originally located in downtown Odessa, but under legislation authored in 1999 by the late State Representative George E. "Buddy" West of Odessa and signed into law by then Governor George W. Bush, the Museum moved into a new building adjacent to the Ellen Noël Art Museum on the UTPB campus.

The idea of the museum stemmed from the assassination of John F. Kennedy in 1963 in Dallas. A Presidential Room was designated in the Ector County Library in downtown Odessa on January 1, 1964. It was opened to the public on February 25, 1965.

The museum maintains a collection of campaign memorabilia, portraits, signatures, documents, commemorative items, and political cartoons of the Presidents, Vice Presidents, First Ladies, defeated presidential candidates, as well as the four Presidents of the Republic of Texas and Jefferson Davis, the only president of the Confederate States of America. There is a collection of Dishong miniature dolls of the First Ladies. The name "Presidential Museum" was adopted in 1969, when the facility occupied a 3,000-square-foot (280 m2) basement of the library. In 1981, the Ector County Library moved to another location, and the museum occupied all of the former library building. The museum also procured a grant from the City of Odessa for further renovation at that time.

The "Library of the Presidents," dedicated to the memory of John Ben Shepperd, Jr., oldest son of the late Texas Attorney General John Ben Shepperd, contains a repository for more than 4,500 volumes, journals, periodicals, newspapers, and documents pertaining to the presidency.

The museum was not fully operational at the new complex until the fall of 2003. Three traveling exhibits were featured from 2002–2003 in the permanent galleries pending completion of the building. The exhibit "Presidential Hopefuls" was a collection of campaign memorabilia of defeated presidential candidates. "We Shall Overcome" described the actions of Presidents John F. Kennedy and Lyndon B. Johnson during the civil rights movement. The third exhibit was a model of the White House, built to the scale of one inch for every foot.

After the relocation, the first Texas home of Presidents George H.W. Bush and George W. Bush was moved to the Presidential Museum site: a modest house formerly at 917 East 17th Street in Odessa briefly occupied in 1948–1949 by the first President Bush, his wife, Barbara Pierce Bush, and first son George. Also donated to the Presidential Museum was the residence formerly at 1405 West Golf Course Road in Midland purchased by George W. Bush in 1977, a year before he married Laura Welch Bush. The Bushes sold that residence in 1985. Due to restrictions imposed by the donor on the use of the Midland house, it proved incompatible with the mission of the Presidential Museum. Though the museum avoids the focus on individual presidents, the Bushes have received special attention because of their early ties to Midland-Odessa.

Mary Frances Beverly, a freelance writer from West Texas, concluded a 1998 article in Texas Highways magazine: "So, here's your ballot. Is Odessa's presentation of U.S. Presidents fun? Educational? Worth the trip? No doubt about it. But in true democratic spirit, come see the museum for yourself, and cast your own vote. Remember, every day here is Presidents' Day. It is worth the trip to this one-of-a-kind museum just to remind yourself of the proud and important heritage surrounding the office of the American presidency."

All content from Kiddle encyclopedia articles (including the article images and facts) can be freely used under Attribution-ShareAlike license, unless stated otherwise. Cite this article:
Presidential Museum and Leadership Library Facts for Kids. Kiddle Encyclopedia.