Christopher Scott Kyle (April 8, 1974 – February 2, 2013) was a United States Navy SEAL veteran and sniper. Kyle served four tours in the Iraq War and was awarded several commendations for acts of heroism and meritorious service in combat. He was awarded one Silver Star Medal, four Bronze Star Medals with "V" devices, a Navy and Marine Corps Achievement Medal and numerous other unit and personal awards. Kyle was honorably discharged from the U.S. Navy in 2009 and published his bestselling autobiography, American Sniper, in 2012.

An eponymous film adaptation of Kyle's book, directed by Clint Eastwood, was released two years later. On February 2, 2013, Kyle was murdered by Eddie Ray Routh at a shooting range near Chalk Mountain, Texas. A former Marine with PTSD, Routh was found guilty and sentenced to life in prison without parole. 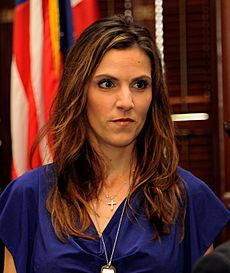 Kyle left the U.S. Navy in 2009 and moved to Midlothian, Texas, with his wife, Taya, and two children. He was president of Craft International, a tactical training company for the U.S. military and law enforcement communities.

American Sniper had a 37-week run on The New York Times bestseller list and brought Kyle national attention. Following its release, media articles challenged some of Kyle's anecdotes, but the core of his narrative was widely accepted. "Tales of his heroism on the battlefield were already lore in every branch of the armed forces", writes Michael J. Mooney, author of a biography of Kyle. 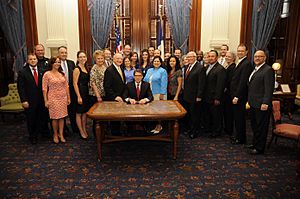 In August 2013, Texas governor Rick Perry signed Senate Bill 162, also known as the "Chris Kyle Bill", to recognize military training in the issuance of occupational licenses. The bill had been co-sponsored by Republican Representative Dan Flynn of Van and Democratic Senator Leticia Van de Putte of San Antonio. The ceremony was attended by Kyle's widow Taya.

Sculptor Greg Marra created a memorial statue of Kyle for presentation to his widow. Fundraising for production of the statue was provided by members of the Tea Party movement.

Clint Eastwood's film American Sniper (2014) is based on Kyle's autobiography. Kyle is portrayed by Bradley Cooper, and his wife Taya Kyle is portrayed by Sienna Miller. For his portrayal of Kyle, Cooper received an Academy Award nomination for Best Actor, and the film was nominated in five other categories, including Best Picture. The film won the Academy Award for Best Sound Editing.

All content from Kiddle encyclopedia articles (including the article images and facts) can be freely used under Attribution-ShareAlike license, unless stated otherwise. Cite this article:
Chris Kyle Facts for Kids. Kiddle Encyclopedia.