Globe of the Great Southwest facts for kids

The Globe of the Great Southwest

The Globe of the Great Southwest is a theater in Odessa, Texas whose design was inspired by that of William Shakespeare's original Globe Theatre. In addition, the complex also features a replica of Anne Hathaway's Cottage. Both buildings are located on the campus of Odessa College.

The Globe Theatre is a non-profit organization presenting classical and modern plays on an Elizabethan stage. It hosts community theater performances, monthly country-western shows called The Brand New Opree, and other community activities. The nearby Anne Hathaway Library, a replica of the cottage in which Shakespeare's wife lived, houses displays of special interest to Shakespeare fans. Full-time theatre activity began in the fall of 1968.

The idea behind The Globe of the Great Southwest was first conceived in an English class at Odessa High School in the late 1950s:

A student brought to class a model of Shakespeare's Globe Theatre and commented to his instructor, Mrs. Marjorie Morris, then teaching in high school, that it would be exciting to have an actual life-size replica of the Globe right here in Odessa. This casual remark caught the imagination of Mrs. Morris and fired her with a zeal which eventually made her dream a reality. 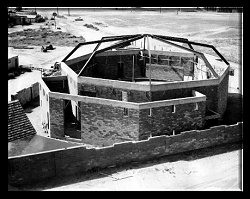 The Globe under construction

The Globe Theatre organization and fundraising efforts for construction were begun in 1958, and construction was completed as funds were raised and became available; it began its first season in 1968. The apron stage and unobstructed balcony views create an unusually intimate setting for a theater of the Globe's size. It has 441 seats. Also, the shape and construction materials, which were wood and plaster, result in excellent acoustics. The interior, with its rich British red carpeting and upholstered seats, and its warm London dock lanterns, makes each visit a "memorable and aesthetic experience."

The building is a simplified and modernized version of its much larger Elizabethan namesake: both have an apron stage backed by a two-story fixed set that forms one side of a polygonal courtyard surrounded by wooden balconies. The Odessa theater is octagonal with a covered courtyard containing fixed seats for 441 attendees and a single balcony, while the original London theater was a 20-sided polygon with an open-air courtyard where most attendees stood and three balconies offered more expensive seats: total capacity may have been as high as 3,000.

All content from Kiddle encyclopedia articles (including the article images and facts) can be freely used under Attribution-ShareAlike license, unless stated otherwise. Cite this article:
Globe of the Great Southwest Facts for Kids. Kiddle Encyclopedia.