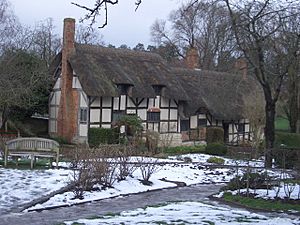 Anne Hathaway (1555/56 – 6 August 1623) was the wife of English playwright and poet, William Shakespeare. Little is known about her early life. Hathaway married Shakespeare in 1582 at the village of Temple Grafton, near Stratford-upon-Avon. She lived in Stratford all her life, even while Shakespeare was working and living in London. She died in Stratford on 6 August 1623 and is buried next to her husband in the Holy Trinity Church, Stratford.

All content from Kiddle encyclopedia articles (including the article images and facts) can be freely used under Attribution-ShareAlike license, unless stated otherwise. Cite this article:
Anne Hathaway (Shakespeare) Facts for Kids. Kiddle Encyclopedia.